Background: It is the second week of September 2016. A very bad week in south India. Lot of disturbance, violence, animosity etc. It is that season of the year where Supreme Court gets involved and Kaveri is a big topic. This year, it went way worse than the previous few years due to many reasons.

For those who want long term solutions, and points of view from both states, please spend time in those links, and also check out references from each. You will learn a lot about actionable steps!

This analysis is Not for YOU: And those who are busy distributing violence videos, sarcastic or insulting memes, chest beating that Kaveri is only "ours", please continue doing that. Don't read this any further. Because my intention is not to discuss any point that is fruitless when it comes to final water sharing details. I am more focused on actual figures, statistics and actionable steps.

What is the water situation in Karnataka in September 2016? Now the rest of this writeup would be purely showing the water situation in Karnataka's Kaveri basin as of September 13th, 2016. This is fully using a fantastic analysis done by a Twitter user named V Vinay - @ainvvy . He calls himself a curious academic entrepreneur. Again, all the information provided from this point on wards, is only from Karnataka's dams, as I did not see any qualitative analysis or data from Tamil Nadu's dams. If you know, please share in the comments and I will update here. 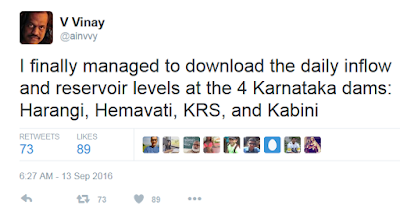 Names of Dams: Mr. Vinay managed to download the daily inflow and reservoir levels at the 4 Karnataka dams: Harangi, Hemavati, KRS, and Kabini.


Water Measurements: Before getting into the data, we need to understand TMC and cusecs. For historical reasons, the measurement is in terms of cubic feet. 1 cubic feet is roughly 28.3 litres of water. cusec stands for cubic feet/second. Or as @sheksis joked, 28 Bisleri bottles/second... More relatable :)

In Human usage terms: To get a sense for these numbers, how much of water is used for drinking, washing cloths, bathing etc. In other words how much water is needed for human in Indian terms, per day? It is usually taken to be about 100 Litres per person per day. This translates to a little over 3.5 cubic feet of water. Do not compare with other countries where more water is available per capita. @abhicrux said, 135 liters/person/day is used for standard hydraulic calculations. All uses included. Rural south India gets less than 100 liters today. So we will go with 100 liters on the average side per person, in a water starved south India.

Drinking Water Needs of Karnataka's Kaveri basin: The estimated number of people in Bengaluru, Mysuru, Mandya and other Kaveri basin areas is about 1.6 to 1.8 crores. This amounts to about 0.063 TMC of water a day. Let's call it drinking water, even though it is for other daily use purposes too. Essentially anything that is not related to irrigation which is the primary user of Kaveri water. Note that not all parts of Bengaluru get Kaveri water. This computation is only for the areas getting Kaveri today.


Taken over a year, it amounts to about 24 TMC of water. This is the water that the state needs to have to take care of drinking water needs. Of course, there will be losses of all sorts, so the figure is likely to be more like 35-40 TMC. Losses are usually in the form of evaporation loss, distribution loss and leakage from dams and pipes.

Water in Dams of Karnataka: Now let us get back to the 4 dams. Harangi has a storage capacity of 8 TMC, KRS in Mandya district has 45 TMC. This is the biggest and the most important reservoir in south Karnataka. Hemavati has 35 and Kabini has 16. That totals to about 104 TMC that can be stored MAX by Karnataka at any given point of time. With around 750 TMC of water estimated for Kaveri river as a whole in a good monsoon year, this is about 14% of Kaveri water that can be stored by Karnataka, at any point in dams.

This is the capacity. Current levels as of September 13th 2016 are at about 5 in Harangi and about 10 in the remaining three. They add up to 35 TMC in total across ALL dams in Karnataka on Kaveri basin. All these are computed with live storage of water without getting into dead storage analysis (which amounts to water that can't be released from dam at the bottom). An additional discharge at the current levels of 12000 cusecs to TN over the next 8 days will mean 8.3 TMC of water. Since some of the water will surely be released for other purposes, and with some inflow, the likely level in 8 days is 25 TMC. Again 25 TMC in total across ALL dams in Karnataka on Kaveri basin. This 25TMC is what we will have to survive with until June-July of 2017 when you will see south west monsoon filling in dams again. That is at least 9 full months with 25 TMC of water, if no further rains happen :(

What about farmers in Karnataka? Forget irrigation using above mentioned water levels. Farmers are screwed in Karnataka for this year! You need 100 to 150 TMC of water for irrigation for rest of the year in Karnataka. Not sure if they could even get one full crop this year, while Tamil Nadu is planning for the second crop now, and might get a third crop also early next year. This is the fundamental reason why Karnataka was burning for days in September 2016.

Dynamics of Dams and Inflow Analysis: Let’s look at the dynamics of the dams. Vinay's data starts from 2011. So we have about 5.5 years of data. Here is a table of the total inflow into various dams. Kabini has small capacity but matches Hemavati in inflow.

As you can see, Harangi and Hemavati sit behind KRS, while Kabini is ‘independent’ and joins later. 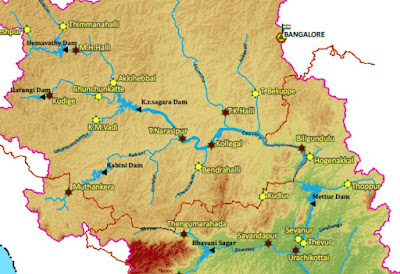 Keep in mind that some outflow from Hemavati can be inflow to KRS, etc. Vinay focuses on KRS and Kabini to look at the data more closely.

Here is Kabini. Most of the water in the months of June to September.
And then the inflow dies down. Look at September. This time we are done through about 10 days. And the inflow has been a mere 1.5 TMC! 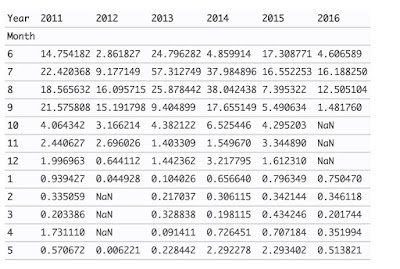 Likewise, KRS dam near Mysuru, has got an inflow of 3.3 TMC for the first 10 days of this month. Will it hit 10 for the month? 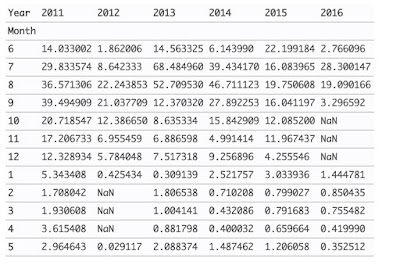 Then Vinay plotted the reservoir level and inflow for KRS. This graph is revealing. Notice how the reservoir level shoot up at monsoon (where the inflow is heavy) and how it progressively decreases until the next. There are small inflows in between, but noting compared to what happens during the monsoon. 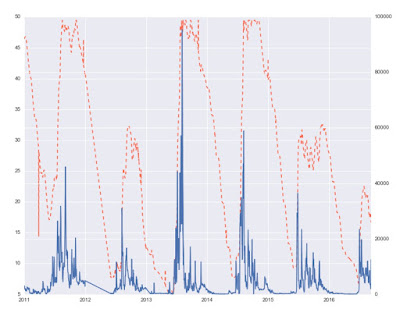 And notice the 2016 inflows and reservoir levels. It is quite pathetic. So the usual inflow after monsoon will also be limited this year. Usually, post September of any year, the inflows are about 25-30 TMC. We don’t see it happening this time. But we don’t have enough data to predict.

What's for Karnataka for rest of 2016 and first half of 2017? It is going to be a very tough year at this side of Karnataka. Farmers are already ditched for 2016. Drinking water might be barely sustained at the current storage levels, for the next 9 months. See above graphs and inflow analysis.

After reading this analysis, it became very clear why Karnataka farmers and Kaveri delta drinking water users, are absolutely outraged at the current situation of draining the remaining precious water from dams. Every TV channel in Karnataka is saying the same thing - We have no drinking water.. why are we being forced to leave the remaining water for growing 2nd crop in Tamil Nadu? Drinking water takes precedence over everything else when it comes to human needs.

Any Suggestion for Politicians of TN and KA? The two states need to demonstrate better sense than landing in court every time there is a distress. Lack of sagacity is the problem. For those who say the Supreme Court would have ‘looked’ at the data and come to the conclusion, Vinay says, he does not know. These graphs don’t seem to suggest so…

There is more in the data, but Vinay says that he will take it up on some other day.  Vinay got all these data using a simple python program… shouldn’t take more than 20 minutes for a programmer to write.

Let's stop here, hoping wisdom prevails all around. I don't think a blog or set of tweets can change politics, courts or tribunal happenings, but this is only meant for common people like you and me, to understand the dire situation in Karnataka today.

Source of Data for Karnataka's dams and water levels: https://www.ksndmc.org/Reservoir_Details.aspx

I wish I could find similar data on Tamil Nadu's dams starting with Mettur for September 2016, to see how good or bad the situation is for Tamil Nadu farmers. Again, if you have similar data from TN, please do share.

Thanks again, Mr. Vinay for a classic analysis.