I came across this week, a survey on the new Aam Aadmi Party's website. 47% of Dilli folks want to give AAP a chance.. Impressive for a new kid on the block.

But the surprise did not long for long. Started reading it through a bit.

Aam Aadmi Party commissioned Cicero Associates(www.ciceroassociates.in), a New Delhi based consultancy firm, specializing in public opinion polling and survey research, to carry out the second round of a Delhi wide survey of a representative sample of Delhi’s voters.  The first wave of the poll was conducted in February 2013, while the data presented here is from the second wave.

Wait a minute.. we have seen this Cicero name somewhere on Twitter. So it took me to the second step. The website of Cicero Associates. Strangely, they are still "upgrading" the most vital piece of their website, the people who own the company.

That made me more curious, because that survey company claimed that their advice is based on results, and not intentions. If the intention is not important, why is the team page empty? Started searching.

Next I landed up on a news paper website.


Twitter was abuzz with charges about how AAP is a Congress front because it chose a company, which has a Congressman as one of the two directors. In the third phase of the survey, AAP had given itself a 28% vote share and Kejriwal as popular preference for the post of chief minister.

A link leading to an article “Proof that Aam Aadmi Party is a front of Congress, survey is false" on a web-based newswire site claimed that one of the two partners of Cicero Associates & Consultants is an office bearer of Delhi Pradesh Congress Committee (DPCC). The DPCC website on Wednesday showed Madhur’s photo and his Badarpur address.

By now it was truly amusing to me..  How can a company seemingly owned by a Congress person (party or fully), can do a survey projecting "massive" opinion in favour of the new kid in political arena, this AAP? The next step was even more better.

Landed up in that page quoted by the newspaper.


For the past few months, we are being bombarded with a survey in which Aam Aadmi Party has claimed victory in Delhi elections. The survey was done by Yogendra Yadav, using an unknown agency called Cicero Associates & Consultants Private Limited. The numbers claimed in the survey were hard for any agency to achieve. They claimed that the survey was carried out between September 5 and October 5 among all 70 assembly constituencies, covering 1,750 polling booths and 34,425 respondents.


As a data scientist, I am quite aware that modern market research is a science and the results cannot differ much from other surveys done by reliable agencies like AC Neilson. Conducting more than 1,000 surveys in a day seemed to be a no mean feat.


The website of Cicero Associates, which was registered just on May 30, 2013, lists their address as A-166, First Floor, Defence Colony, New Delhi, Delhi, 110024. So the company did not have a public face before May 30, 2013. The snapshot of the page on that day by Archive.org lists a freshly hosted domain. I am quite familiar with Delhi and know that A-block of Defence Colony cannot house so many field agents to conduct a massive survey. So I decided to investigate.


Registrar of Companies data reveals that the authorised signatories of Cicero Associates are Sunit Kumar Madhur with the address of GA-34, Block GA, Pulpeladpur, New Delhi 110 044. The other Director is Dhananjay Joshi with the address of A-7/3 SFS Flats, Saket, New Delhi 110 017. An authorised signatory is the Karta Dharta of the company.
A simple Google Search reveals that A-166 First Floor, Defence Colony has the office of Langjobs, Interpreters India and other businesses. It certainly didn’t look like a market research entity.


Delhi Pradesh Congress Committee Site lists one of the Directors of Cicero, as a General Secretary - Shri Sunit Madhur, GA-34, Pul Pahladpur, Badarpur, New Delhi-110 044, 9311012007 as a General Secretary. His own twitter profile describes himself as: “Congress worker. Entrepreneur. Only the people who have to compromise& be pragmatic in their daily lives know the value of idealism and romanticism....”


A name and address like that is unique so both are the same set of people.
The other Director is a property dealer running a firm called Intouch Associates revealed from his profile at 99acres.com.


For Aam Aadmi Party, which is dead against Congress, it seems quite strange that it has to choose a dummy market research company, which is owned by a known Congressman to conduct a survey!


By now I was clear as to what was all this fake survey and worse.. the role of AAP as the B team of Congress as so many people on Twitter say. I initially didn't pay much attention to such theories, but looking at the details here, it was not hard to believe so any more. And this screenshot of research posted on that website, with data from Ministry of Corporate Affairs website confirmed that they had indeed a perfect research done. And you can spot at the left bottom corner of the image, a clear solicitation to get someone to youth or main Congress party. Download and zoom the image if you wish to read thoroughly. 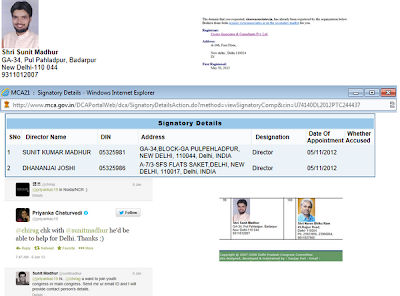 And by the time I got to the twitter account of this Sunit Madhur, Director of this mysterious Cicero Associates, it was probably late. He has no bio there.

Whom are you trying to fool with such "farzi" surveys, Mr. Kejriwal? Worse.. are there still some people who believe that there is no mysterious "hand" behind this sudden hype of a new kid on the block called AAP? :)