If India has to hit terror factories in Pakistan, be ready for a war with China!

It is about 32 hours since the attack on Uri army camp in India, by Pakistani terrorists. There is tremendous amount of anger in India, specifically in the sections of society which I normally don't see overreact on social media.

This was the front page of paper at my home - "We have had enough!"

The overwhelming majority are screaming - Dear Prime Minister.. do something. do quickly..


But the big question is.. Can India attack Pakistan this week?

But still.. 69 years of handling of Jammu and Kashmir by India is something we have to look at right now. Can India afford to hit Pakistan where it hurts the most, for Pakistan's obsession with Jihadi terror export all these decades?

While I was looking for some pragmatic answers, amidst very loud war cries that I see in press, TV and social media, I happened to see this tweet set. A very thoughtful set of tweets by the user @vadakkus. From here onward, I am merely reproducing the fantastic probing analysis done by @vadakkus, with very little info from my side. Read it fully and then comment on what Indian government can do, should do, and most importantly, when to do. Vadakkus starts off a tweet storm on the entire Pakistan - India fiasco. There is more than what meets the eye here. And issue is NOT Kashmir. It also does not look like anything to do with Islam, Separatism, Human Rights, Army, AFSPA, Track 2 negotiation and many other things we hear on TV.

It is must deeper than that.. Geo politics! 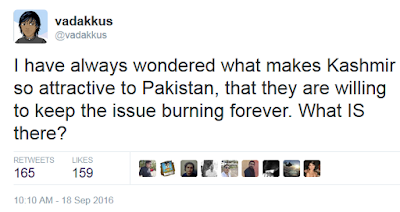 Why is Pakistan obsessed with Kashmir? I have always wondered what makes Kashmir so attractive to Pakistan, that they are willing to keep the issue burning forever. What IS there?
{Prem Shekhar, a well known Kannada columnist informed a few weeks that Pakistan  had even offered to give up East Pakistan in 1950s, in return for Jammu and Kashmir on the sidelines of official discussions with India! So definitely it is not religion or Kashmiris.. it is much deeper than that. It was water sources then, but now much more deeper...}

Why is India so reluctant to hit back at Pakistan? Also why does India always seem to be unable to retaliate to Pakistan in kind (it should, totally) and pussyfoots around Pakistan, despite all the atrocities it commits in India from daily incursions in Kashmir to the Mumbai attacks. They spend too much money on all this and the country, despite no visible revenue-generating industry (terrorism no revenue) has managed to survive until today, develop nukes and has so much international clout? Where does it get its money from? Why?? Why is India reluctant to strike? There must be reasons.

Yes, water is an issue. The Indus and its tributaries. But where do they get money to keep the issue alive? There is more to this than water. Today, someone told me about this thing and I was stumped about how bloody obvious this is, and even then, NOBODY in India talks about this!

It is China... stupid.. It is China and CPEC: The "thing" is the CPEC: China-Pakistan Economic Corridor. If you look at it closely suddenly everything falls into place. Kashmir, Balochistan, India's unwillingness to strike, silence of international community, everything else. Pakistan is just a front.

The real sponsor is hiding behind.

Maybe it is because Indian method of viewing everything in black & white. Pakistan sponsors terrorism to get Kashmir. It is not that simple. Pakistan kept the Kashmir flame burning until the 1990s to meet their ends, when China conceived the CPEC and decided to take over. A bit on the CPEC as no one seems to have heard about it. China has a huge geographic handicap: no access to southern world oceans.

So Chinese shipments from Europe, Middle East, Africa have to travel all the way around India, Malacca and ASEAN. China has serious problems with most countries in that region due to its aggressive military posture.

Why Pakistan is so important for Chinese economy? What if China could get a route through Pakistan to access the Arabian Sea? That line in blue. Look at it, so much distance, money saved! That, is the CPEC. A corridor of highways and railways will run from Kashgar in China to Gwadar in Pakistan (Baluchistan) on the Arabian sea near Iran border. And ALL the infrastructure and associated stuff for CPEC will be constructed for Pakistan by China, free or cost or for negligible loans.

What is CPEC?Four Six-lane Expressways from north to south Pakistan, four different routes. All main railway lines being upgraded to 160 kph double. A six to eight lane super expressway Karachi to Gwadar and Hyderabad Innumerable coal, thermal, solar and hydro power plants all across Pakistan. All of Gwadar, including a mega international airport! Then Hospitals, schools, colleges, tech institutes, even a Metro line in Lahore!

More on Karakoram highway: Soon to be a 4/6 lane highway through some of the world's toughest terrain. A high-capacity highway across the Himalayas!

Now, though the CPEC is a recent thing, the idea had taken birth long back. The Karakoram highway started building in 1959, opened in 1979! Possibly Pakistan had refused China access to Gwadar then as they could. But now they have no other choice but hand over to China.

Why CPEC? OIL: Gwadar is just 400 km away from Muscat and 500 from the Strait of Hormuz through which all Gulf oil passes. 12 hours at sea! Proximity to Africa: China virtually owns much of Africa today. Billions in investment, buys natural resources. Nothing better than this. Pakistan as a market: China will flood Pakistan and Gulf with its cheap products and make a windfall there too. Proximity to new friend Sri Lanka.If USA/UK (control Malacca strait - Singapore) or India in Indian ocean decide to choke it, China will have no problem as it has CPEC.

But, all of CPEC and China's ambitions bearing fruit depends on the Karakoram highway. That depends on PoK continued to be occupied by Pakistan.

Money Involved: With the CPEC, China has sunk close to 50 BILLION Dollars in Pakistan. Of course, China gets free access to all this infrastructure in Pakistan. With this, 20% of Pakistan's GDP is now Chinese. China has Pakistan now firmly by the b***s, so much so that Pakistan can now be China's 24th province. With so much invested and at stake, China wouldn't even think twice about ruthlessly suppressing any attack on Pakistan, because they own it now.

Doesn't India know all this? Of course India knows all this. If we were to attack Pakistan, we would have to deal with China. Pakistan is small fry. China is not.

Who would side with India? Mostly nobody. Why? Because China is involved. How international geopolitics work, most don't get that either. USA wants to support us because China makes it nervous. But US corporations are over invested in China, so Uncle Sam will look the other way. Russia - Don't even think about it. Putin has enough troubles at home, and India's pandering to Obama hasn't got him amused. Europe will sit just and watch (because China), and all of the Middle East will (clandestinely) support Pakistan for obvious reasons (Islam).

People think alliances between countries are forget like high school friendships - on emotional grounds of some sort - No. Not at all. International friendships are always based on "how can I benefit by allying", "what terrible can this guy do to me if I don't ally".

So, India will left out cold if it were to as much as touch Pakistan. We will mostly have to take on BOTH Pakistan and China. Mostly. Can India take on both Pakistan and China alone? From two (or three) flanks? We are surrounded by China's friends. What do we do? Dunno.

A bit more on the Karakoram highway: 1962, remember? What if the Chinese were testing the Indian waters before building the highway? China could've walked through India. Still, they withdrew. They were only testing India's resolve to defend PoK if it came to that. We have all but written off PoK. All Wikipedia articles tell all of PoK as "Pakistan". Not Pakistan administered", but Pakistan. Hurts :(

Here is the Khunjerab Pass (PoK): the "top" of India, the border between India and China, but now Pakistan.

Here is the Karakoram highway near Gilgit in India (PoK) and under construction somewhere in the mountains. It should be obvious by now that China does NOT want India to reclaim its land lost to Pakistan in 1947 and 1948 - the strategic Karakoram ranges in Gilgit-Baltistan area of Jammu and Kashmir. It is as simply as that!

Here is the entire map of the Karakoram Highway from Kashgar to Rawalpindi. Look where all it passes through.
China owns Pakistan for most part today: CPEC and all associated stuff are called "China-Pakistan Friendship" something or the other. No friendship there. Just Chinese business. China is not doing business with Pakistan. It is running its business in Pakistan. It is running Pakistan. China pays for protection. If things get push to shove, China can tell US: "We will nationalize your businesses if you don't tell India to withdraw". What will we do?

What we should first realize is that there is no Pakistan. There is only China. Pakistan is just a front. We should deal accordingly. It is in China's interest to keep Kashmir burning. If there is peace in the valley, India MIGHT set its eyes on PoK. Chinese know that India has a strong Prime Minister today who can think of that. China does not want India to even think of getting PoK back. Of course, China did not light the Kashmir fire, but it certainly looks like it is them who keeps it burning that no consensus is reached. So, in addition to water, religion, ego, demographics and so on there is one more reason behind the Kashmir unrest: China and CPEC.

Is dialogue with Pakistan sensible? It is utter foolishness to think that in such a case we can resolve this through dialogue! We talk one thing while issue is another! Issue is NOT what we think is the issue! We and our govt should first understand this. I am sure they have. Hopefully they aren't helpless. China is waging a proxy-proxy-deceptive war which we cannot understand or prove or blame. We need to mobilize some other way.

War with Pakistan? Vadakkus said at the end - I am not generally not a warmonger, but this has gone too far. We should strike. Do something. I only wish something be done about those 17 Indian soldiers who were killed without any provocation. They didn't have to die. Take on both China and Pakistan. Maybe. Can we? I don't know what we should do. Hopefully our hands aren't tied and someone is coming up with a plan to hit them. Hopefully.

Baluchistan's role: Why Pakistan got all worked up when India raised Balochistan? Gwadar is in Balochistan. Much of CPEC infra passes through Balochistan. The CPEC is China's hope at lifting its sagging economy and securing its strategic position in the region. Its future maybe depends on it. Karakoram- Hindukush- Pamir region since ancient times been strategically sensitive. The Silk Road. China wants control of the new Silk Road. If India were to take PoK we would squeeze the Karakoram Highway shut. No more CPEC, Silk Road. China done for. That is the whole game. Highways are primary military conduits rather than civilian. Whoever controls the highway controls the region.

Ultimately.. Pakistan's ultimate aim is to establish an Islamic caliphate. Apart from this China helps them through CPEC.  You might disagree with Modi et al but please support the govt right now in whatever action it takes. Politicking can wait. Wait two more months before taking any harsh decisions. Things might change post November.

What do you think India should do now, after reading this fully?