RSS leader Dr. Mohan Bhagawat was mentioning about the late HV Sheshadri. An interesting narration. Let me see if I can type it keeping the same interest that he generated in the talk.

Once HV Sheshadri of RSS was traveling in a bus in Karnataka. He was the Karnataka pranth pracharak. A well dressed and educated man boarded the bus, and sat next to HVS. They got into hello-hello chats. The man talked about his MCom education, employment at a bank, his family etc.
Then he asked HVS. "What do you?"
HVS: "Nothing. Go from home to home, tell good things. Serve the society. Pretty much that's it".
Passenger: "Then how do you take care of your family?"
HVS: "I am not married. I don't have a family to take care of".
Passenger: "So you don't have a family. You don't earn anything. You have no duty of raising a family.. what's the use of your life? You are not an asset to the society".

HVS: "Do you know about Swami Vivekananda? The monk who...."
Passenger: "Of course.. Who doesn't know the Swami? I have studied many times about him. Here are some details....."
HVS: "Was he your relative?".
Passenger: "How can that be? He's from Bongo and I am from Karnataka".
HVS: "Oh.. maybe you met him?"
Passenger: "Are you joking? I was born 50 years after his death!"
HVS: "Maybe he visited your village sometime back?"
Passenger: "No. Never".

HVS: "Strange... Swami Vivekananda was not your relative. You have never met him. He never even came near your village. And he was from generations before you. But still you know a lot about him. You also should know that he never earned any money. He didn't support his family the way you do. He never got married. He didn't raise kids. But everything he did in his life was for the society.. for the people.. for the country.. for the humanity. He lived his life per Dharma, to the perfection.

On the other hand, your family's 8th generation before you did everything you are saying as valuable to the society. They got married. They raised kids. They educated them. They earned. They passed on things so that you are prospering today. Still you don't even know their names!!"

Both kept quiet for some time....for a very long time...

The passenger seriously felt something in his heart. He apologized to HV Sheshadri and asked why this kind of thing happened.

HVS: "See.. it happens with all of us. We focus only on the material benefit for the immediate family. But that's not everything about Dharma. In the real sense, Dharma is all about Dharana or carrying. Dharayati iti dharma.  We alone getting educated, enjoying or prospering in life is not enough. We should take the society with us. Some of us can take smaller load and some like the Swami can take massive load. But our efforts must be to take everyone with us on the path of prosperity. That is the true Sewa. And, Sewa or selfless service is the best Dharma. Hence our lives must be dedicated as a daana or gift, for the humanity. Try to think more on why some of us make Sangha and its Sewa as the topmost priority in life and dedicate ourselves towards the society".

Needless to say.. the passenger had nothing else but total respect to HV Sheshadri!

Recently, I spent some time understanding the physical India and the tectonic plates movement. This was right after the devastating earthquake in the Himalayan region killing over 6000 already in Nepal and close to 100 in India.

My key question was - Why is the Himalayan region so susceptible to earthquakes? But while understanding that, I had a good revision of the entire physical features of Indian subcontinent. Right from 12 crores years back to today, and the projection 10 crore years into the future!

Sharing some highlights for those interested in our Bharata Varsha, Bharata Khanda and Jambu Dweepa :) 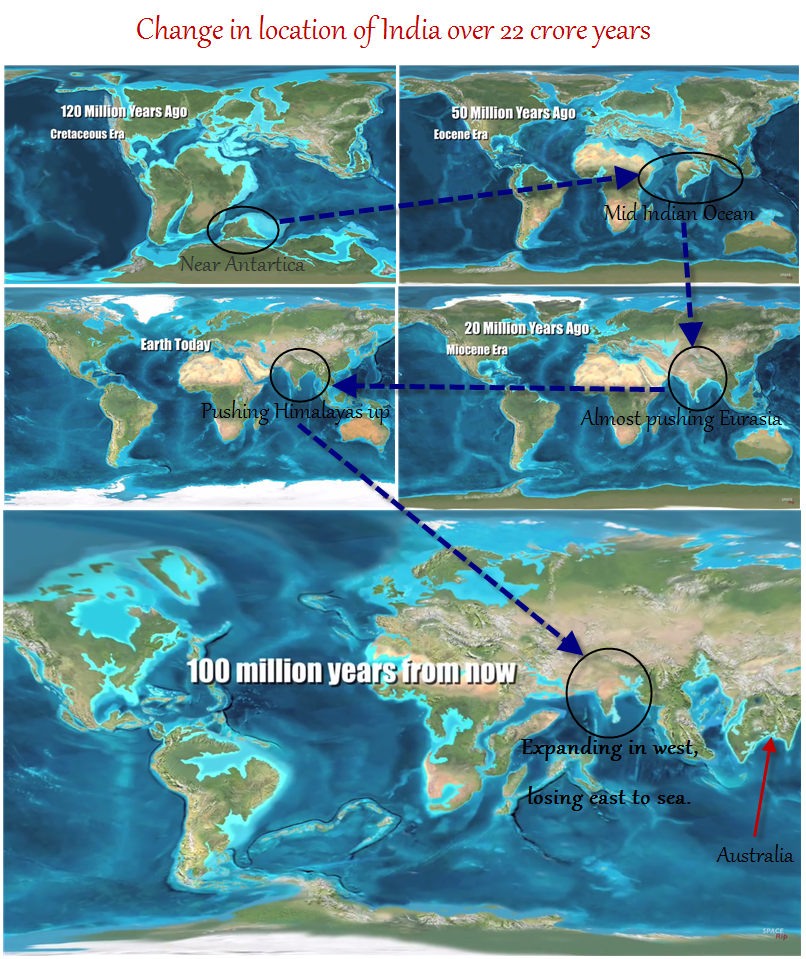 12 crore years back, India was fairly close to today's Antarctica's location. Trace our Indian subcontinent's movement right from Antarctica region to northern hemisphere pushing the Eurasian tectonic plate up here. India moved from Antarctica region close to African east cost to middle of the Indian ocean to colliding with the Europe-Asia plate and to pushing Himalayas up and reaching the place today.

Where would Indian subcontinent be 10 crores years from today? Pretty much the same place as it can't push any considerable distance. But the western half might expand, while the eastern part might get submerged per the scientific projections.

Watch this video for a graphical representation of what I am trying to say.


Here's another video giving a closeup look at the most recent 5 crore years.


Isn't it amazing to see how India changed the Asian continent, and most importantly gave the planet earth, the most amazing Himalayas (Hima = Snow, Alaya = Mountain, in Sanskrit)? Out of the top 15 peaks in the world, ALL are in the Himalayas. If India had not traveled from the tip of southern pole to northern hemisphere, planet Earth would have been a much boring place without giants like Mount Everest, Kanchanjunga, K2, Kailash mountain etc..

If your interest in tectonic geology has gone up, don't miss this awesome video on how Earth was formed, how earth's land surface came up, how continents formed - split - rejoined - split again.. Amazing journey over 10s of crore years!


Now that your thirst for tectonic plates, earthquakes, Tsunamis, island formation, Himalayas etc. is quenched, let's move on to more India specific things. I was reading this morning more connection between a very historic event that wiped out Dinosaurs 6.5 crores years ago, and the rise of Deccan plateau over which I am sitting and typing this today. Why did Deccan plateau rise? Also, note that India was not exactly where it is today, as 6.5 crore years ago. It was still somewhere near Equator, making the massive asteroid impact point on the western hemisphere, directly antipodal (exactly opposite place of the sphere in the other side) to the Deccan plateau today.


Here is a simple depiction of what is antipodal point when you take a sphere.

Here is the interesting article that describes how the largest Deccan eruptions, referred to as the Wai subgroup flows, which produced about 70% of the lavas that now stretch across the Indian subcontinent from Mumbai to Kolkata. These researchers argue that the impact likely triggered most of the immense eruptions of lava in India known as the Deccan Traps, explaining the “uncomfortably close” coincidence between the Deccan Traps eruptions and the impact, which has always cast doubt on the theory that the asteroid was the sole cause of the end-Cretaceous mass extinction.

For those not familiar with the Deccan traps, here is a beautiful sight.
So we learned quickly about the tectonic plates, the great movement of Indian subcontinent from the southern hemisphere to the northern hemisphere, and the amazing connection between the Dinosaur extinction asteroid impact, and the Deccan plateau. Keep in mind, we are talking of extremely high amount of volcanic eruption into the atmosphere right from India, between today's Mumbai to Puri, and Nagpur to Bengaluru region!

Now comes the most important question. Why is India termed a "subcontinent"? Was it just a fancy name due to the amazing diversity of languages, cultures and other diversity? Or was it something beyond that?

Well, I found my answer today. India is called a "subcontinent" because it is the only country on the planet that has ALL the six types of physical features described on planet earth. Wow.. exciting isn't it? Let's find out what are those six physical features and their subcategories.

Feature 1: Mountains.
India is home to all types of mountains described in physical geology. India is home to one of the world's oldest fold mountain called Aravalli range spreading across Gujarat, Rajasthan, Haryana and Dilli. India is also the home to the world's newest mountain ranges, the mighty Himalayas. India has the Western Ghats, one of UNESCO's eight biological *hot spots* of the planet, among other mountain regions.

Watch this educational video to learn about the mountains of India. Right from the coldest mountain region to the tropical mountain regions are there in India. This video shows a very interesting sub section of the four cross sections of the might Himalayas, taking you right from the plains of north India to the Mount Everest, to the Manas sarovar holy place, to Tibetan plateau.


Tip: Do you know about a place just north of Jammu and Kashmir (not in India), that is called a *knot*, because four of the world's great mountain ranges start from there, including Himalayas? See the videos here.

Feature 2: Plains.
India is home to some of the most fertile plains on this planet. The Indus planes, the Gangetic planes and the Brahmaputra planes of North and North-East India are amazingly diverse. 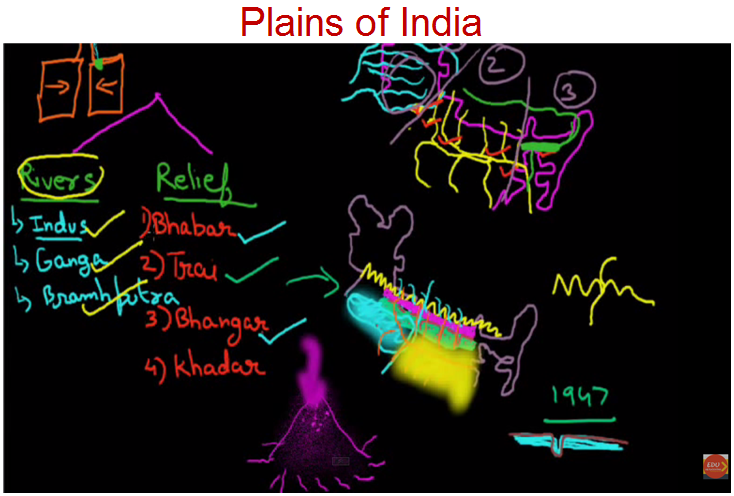 Watch this video to learn everything you want, about the plains of India, how they were formed and the difference between each section of plains.

Tip: Did you know that India converted most of Tarai or marshy plains of North India into agricultural fields since 1947, to settle and feed the large group of refugees who came in during partition?

Feature 3: Plateaus.
India is home to some of the oldest plateaus on mother Earth. We already talked of Deccan plateau earlier. Did you know about the economic importance of the Chhota Nagpur plateau and its incredible deposits of iron and other valuable ores? 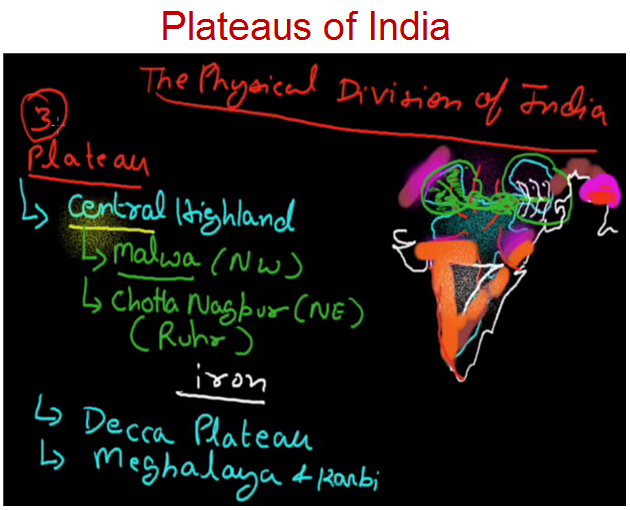 Watch this video to know all you want about plateaus.


Tip: Did you know that Deccan plateau and Chhota Nagpur plateau of India are the two, that NEVER were submerged under sea over 100s of millions of years? Not even during the four major ice ages or after ice melting! Extremely rare examples of always being above sea level places, yet never below the ice sheet places. 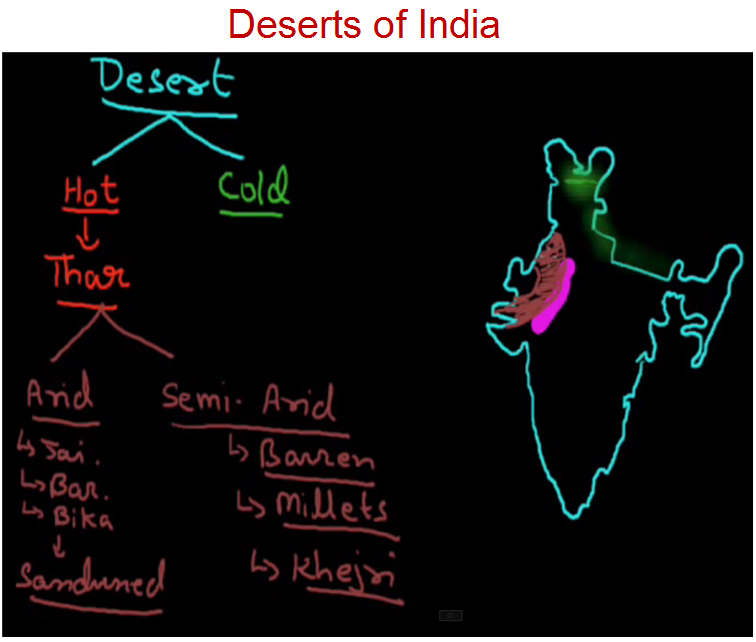 Watch this video about deserts.

Feature 5: Coasts.
India is home to over 7000 KM of coastline. This is the seventh longest coastline for a country in the world. Also, the coasts are very historic and very diverse connecting 3 seas and one ocean.

Watch this video about coasts.


Tip: Some coastal areas of India like Dwaraka in Gujarat, trace their history back to 10000+ years of continuous human settlement.

Feature 5: Islands.
India is home to both Volcanic and Coral islands. 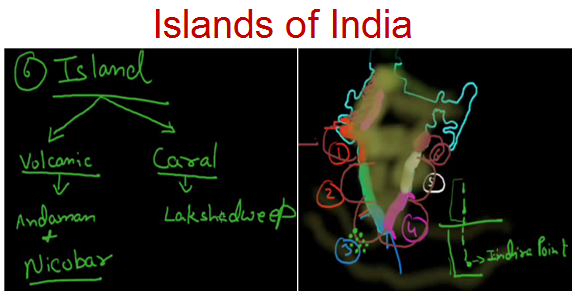 Watch this video about islands.


Tip: Traditionally we say Kashmir to Kanyakumari as describing India. But the physical southernmost tip of India is Nicobar islands - a point called Indira Point that is more than 1 degree latitude south of Kanyakumari!

Isn't India one of the most amazing countries of India?
But most importantly.. India is the ONLY country that is also a subcontinent! You leaned why :)