The Kannada History of Maharashtra 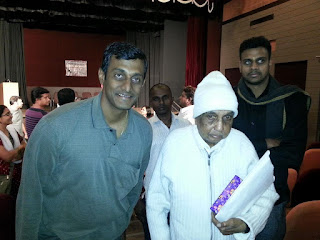 Dr. M Chidananda Murthy is a researcher, historian and scholar par excellence. Even at age 84, he has great grip of his research and presents his papers with amazing clarity. He has published a long list of papers and books throughout his life, and lots of debates happen on his findings. His strong support to Hindutva in particular makes his opponents very uncomfortable. His research on Tipu Sultan in particular, exposed the other side of Tipu which self-proclaimed seculars had a very hard time digesting.

I have met this extremely gentle human many times. I am thoroughly impressed with his ability to research into Indian history in a precise manner.

Today, I came across his column. "Earlier Karnataka was three times the size of today's Karnataka". If you can't read the font properly in the image below, use this link to read the Vijayavani epaper. 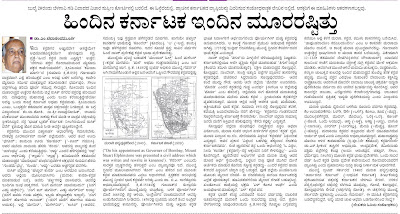 The focus of this article, with lots of historical proofs is to inform that during ancient and medieval periods, Kannada speaking areas were from Kaveri delta in today's central Tamil Nadu till Godavari in Nashik area of Maharashtra. As with everything in history, there would be for's and against's to such claims. But I thought it would be useful to give a quick translation so that those interested further in research, can pursue the topic.

Some snippets from his article, which extensively focuses on today's Maharashtra, and its Kannada past in many areas. Here are some districts of Maharashtra for which the Kannada influence has been researched and presented by Dr. Murthy in this article.
Sri Vijaya's Kavirajamarga from 850 CE, has given 8th and 9th century CE description that Karnataka, or the land of Kannada speaking people, extended from Kaveri to Godavari. 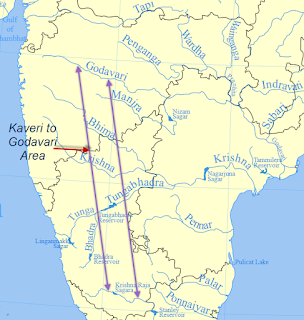 Deshabhakta Veer Savarkar is from Nashik district. His father's place is Bhagur. His mother's place is Kothur. Notice "Ur" or "Uru" in both places, that are distinct Kannada names. Savarkar's family dog was named "Kariya" (Darkie or Blackie in Kannada). Savarkar's father used to call Vinayak as "Balam Bhatta" during younger days. That name is very popular in Karnataka.

Nashik district has a distinct tribe called "Hatkar Kaanadi" people. Maybe they are named that way because they lived in Huts and spoke Kannada (Kaanadi). Per Chidananda Murthy, they are the native people of Nashik from ancient times. Even today that tribe speaks sentences like:
Here, magadir, magaLdir, usiraat (avasara) are all old Kannada words. Similarly Hatkar Kaanadi people use kundal (hair), ba (mother) and many other words showing that North Maharashtra's Nashik area had Kannada population 1000 years ago.

Next, Murthy tells about Mumbai. A famous place today in Mumbai, Malabar hills is per him named after "male" people. In Kannada Male (maley) means hill. British would have used this for the hilly people (ghaati) who lived there. In 1818 (or 1819), when a new British person Mount Stuart Elphinstone was appointed as the Governor of Mumbai, Malabar hills people submitted a letter in Kannada welcoming him. British used the word "Canarese" or "Kanarese" to describe Kannada speakers. That's why they named Uttara Kannada and Dakshina Kannada districts as North Canara and South Canara districts.

Some evidences suggest that Mumbai's original inhabitants, the KoLi people, spoke Kannada centuries ago. BA Salettur has opined that long ago, today's Mumbai area was inhabited by Kannada speaking people.

Talking further about Mumbai, the marriage treaty of Charles II of England and Catherine of Braganza, daughter of King John IV of Portugal, placed Bombay in possession of the British Empire in the 1660s, as part of dowry of Catherine to Charles. Dr. Murthy says that in 1670, when the British brought in new law in English, they translated it into Portuguese and Canarese (Kananda) to help the inhabitants or Bombay. Goa during those times also had many Kannada speakers. In 1737, a British writer has described Kannada as a language of "lower class" people of Mumbai. 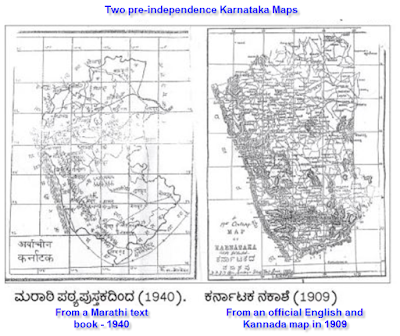 Dr. Murthy presents two maps - One from 1909 (English and Kannada) and one from 1940 (Marathi text book), that indicate the contemporary Karnataka of those times. The 1940 text book map published by British government, named "Arvachin Karnataka" (Modern Karnataka) has Belagavi/Belagav in it. The 1909 clearly is much larger than what Karnataka is today. It includes today's Goa, Belagavi, Kolhapur and even Solapur in Karnataka.
Of course, the districts were merged into administration of various neighbouring kings or provinces during British era. You can compare that side by side with Karnataka since 1956 States Reorganization done by Jawaharlal Nehru's government to get an idea of districts within today's Karnataka and the ones which are with other states today.

Dr. Murthy continues district-wise in Maharashtra. He says that betel leaf growers of Nashik are "Tigula" people, the same ones found in Karnataka speaking Kannada or Tamil. South Maharashtra's districts like Solapur, Kolhapur, Nanded, Sangli etc. have most of their ancient shila shasana (inscriptions) in Kannada.

Solapur's village deity (grama devata) is Shri Siddheshwar. His name was Siddha Rama, and he was a vachana writer 800 years ago. His father was Muddu Gowda. They are from Moradi village of Solarpur. Moradi or Mordi in Kannada means small hill. Vachanas are Kannada literature of Lingayat or Veerashaiva community. So the Kannada origin of Solapur goes back centuries or even millenium.

Solapur district has a very famous temple for Vithoba or Vitthala in Pandharpur. Marathi scholar RB Shere clearly attributes Kannada origin to Vithoba. Sant Dnyaneshwar in one of his Marathi abhangaha screams - "O Vithala.. You are Kaanadi (Kannadiga).. Hence you are not hearing my pleas". You can read more on Sant Dnyaneshwar, Marathi and Kannada in my earlier blog here. In the famous Pandharpur temple, the last song sung for Lord Vithoba after all puja is in Kannada - to put him to sleep.

Jejuri near Pune has the famous Khandoba temple. Khandoba is a Marathi name for Mailara, a very famous name for Shiva in Kannada. If you travel in North Karnataka, especially Hoovina Hadagali area, millions of people worship Shiva in the form of Mailara or Mailara Linga, with almost exactly same description as Khandoba. In Khandoba's major festivities, people near Pune even today shout "El Koti Ughe" or "Khande rayaca Elkot". Here "Elu" and "Kote" are Kannada words meaning Seven forts.

Coming to literature, at the feet of Bahubali's statue in Shravana Belagola in south Karnataka, there's an inscription "Shri Chavundaraje karaveeyale". This from 983 CE, is believed to be the earliest Marathi inscription ever found. But Kannada was existing for centuries before that. Per Dr. Murthy, Marathi existed in the northern regions of Godavari by then. So this inscription was for those people, along with Kannada and Tamil inscriptions for other people visiting this place. Till 12th or 13th century, most of today's Maharashtra below Godavari river were Kannada speaking areas. Badami Chalukyas, Kalyana Chalukyas, Rashtrakutas and many more were ruling over these areas. It was only since the Yadavas of Devagiri about 800 years ago, that Marathi spread widely into today's southern Maharashtra area, replacing Kannada (and some Telugu).

The famous Elephanta caves near Mumbai, were built and temples carved by Kannada kings - Chalukyas and Rashtrakutas. Before that, Pulikeshi II had fought Harshavardhana at Narmada banks itself, going far north of Godavari river. And the only battle Harsha lost in his life was this one!

Chalukya emperor Pulikeshi's inscriptions are found in the world famous Ajanta caves today in north Maharashtra. It was during Chalukya and Rashtrakuta empires Ajanta and Ellora became great centers of arts and temples. The world famous Kailasa natha temple in Ellora was built by Kannada king Krishna I before 774 CE using a unique top to bottom rock chiseling technique. It is estimated that about 400,000 tons of rocks were scooped out over hundreds of years to construct this monolithic structure!! The contribution to Ajanta, Ellora, Elephanta, Solapur, Pandharpur, Kolhapur and many other areas of Maharashtra by Kannada kings and people is immense.


Then Dr. Murthy goes into the vocabulary of Marathi language. There are lot of Kannada origin words there. Olage or Oule (inside), Kolu (stick), Tupa (ghee), Mudila (before, first), Oli (letter), Konth (weapon), Balanti (mom or newborn), Aḍakitta (nutcracker), Akka (sister), Anna (brother), Veergal (stone inscription for a martyr), Mechu (small sword like device), Hon (gold)... If you go into depth, you will find that Marathi has a Kannada or Dravidian foundation from ancient and medieval times, but the upper structure is that of Aryan language. Even today's Devanagari script being used as a standard to write Marathi, is an adaptation of recent centuries. For almost a millennium Modi alphabets were used to write Marathi (and occasionally Kannada in Maharashtra).

Per Dr. S Srikanta Shastry, Shatavahana empire that ruled over Maharashtra 1700 years ago, had lot of Kannada (and Telugu) impact.

Then Dr. Murthy finally mentions about Ananthpur and Chittoor in Andhra Pradesh, and Dharmapuri, Salem and Nilgiri areas of Tamil Nadu, to cover the ancient Kannada links.

The purpose of me translating this is not for any political reason. I have good friends from every language. I just found it historically interesting to see the linguistic overlaps. In some cases, I have added a few words of my own, giving additional Wiki or other links to establish better connection. Just like any case involving neighbours in India, you can also find the other side of overlap, if a research is presented properly.