At an event on Saturday night, my friend Gokul gave a pamphlet. Hey, tomorrow, there is a pilgrimage tour, do you want to go? I was like to which place?

I gave a strange look. In Bengaluru? That too a day long pilgrimage? Then saw the details and got excited. Why not? So was on the pilgrimage bus at St. Mark's road at 7.30 AM. It was a good decision because I was going to enjoy the day thoroughly.. In what I call in Modi's lingo as "Sadbhavana" Yatra :)

This is organized by a Catholic Christian group in Saint Mark's Road. Most of the occupants of the bus were Christians, but there were some Hindus like me. There was one Muslim and one Buddhist. More than the composition, it was the interest of the people in other modes of worship, that was important.

All the areas we went are tracked in this map. 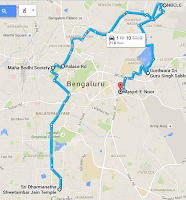 Jainism for me is one of the Guru Paramparas of Dharmic India. But politically it is a different religion. There are two kinds of Jainism. Shwetambara and Digambara. We went to a Shwetambara temple where the prime deity is Shri Dharmanatha. He is the fifteenth Tirthankara among the 24 highly revered Jain Gurus. It was nice to see women putting pastes (Shri Gandha?) to various parts of murtis, the swastikas drawn with rice, the pious women monks who were busy in prayer and much more. This is a prayer place for many Rajasthanis in Karnataka.

Devi Padmavati's temple is in the back. Nakoda Bhairav and many other murtis exist in this temple complex. Beautiful white marble temple with soothing bhajans :) 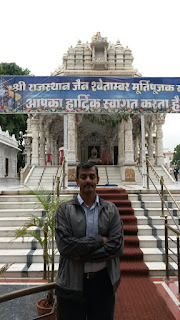 This Buddhist temple was getting decorated by the time we went in the morning, for their special Sunday prarthana. It's a beautiful temple with a Bodhi tree (Peepal). I saw some idols of Buddha gifted by Thailand as Thai language were written at the bottom. This center has mostly North East Indian people settled in Karnataka. This center follows the Theravada sect of Buddhism. Theravada as far as I know is a synonym for Mahayana type of Buddhism, which is different from Hinayana or "smaller vehicle" Buddhism. Buddhism again for me is a different Guru parampara in Dharmic traditions, but technically it is a religion now. 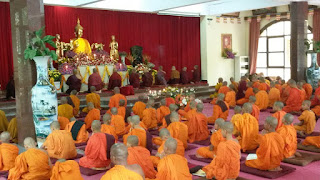 It was so nice to hear nearly 2500 year old Pali language prayer being sung in a melodious way. You have to follow men and women sections in the temple and a great place for meditation. 2500 year old glorious Indian culture comes right in front of your eyes hearing the powerful Pali hymns! 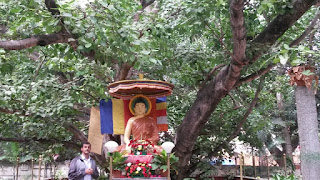 We also got nice breakfast served by the Buddhist monks. Our favourite Uppittu was made nice by the North Eastern friends :)

Dargah is a type of Islamic place where a Muslim Guru or Peer's tomb exists. Not every sect of Islam accepts Dargahs, and some term these as UnIslamic.

This Dargah in my view is maintained by Sufi sect of Islam. If not, Shias. We were treated well here. There are restrictions. Women can't enter the main Dargah part, but can come near. Head cloth is suggested for men and women. 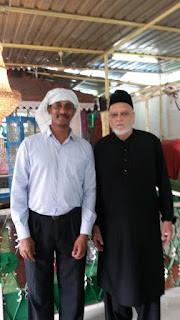 I went inside and stood next to the religious man here who sings praise or prayer. It was a soothing song and he later translated. He explained that on behalf of everyone who was there, irrespective of faith, he prayed for their welfare. I was particularly interested in the hand figures, and what they represent. The symbolism of these Hand signs and other rituals performed here had lot of Hindu influence. 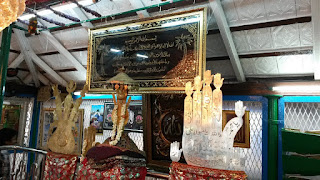 There is a small mosque also in the complex where they read Namaz. Had a lot of discussions with the Dargah staff on who was this peer, how many centuries ago this tomb came up, difference between Sufi and Sunni Islam and much more. They were open in answering all. Served nice tea too later.

The next visit was to NBCLC - National Biblical, Catechetical and Liturgical Centre. This is a very different type of Christian complex. It is not a typical Church, but a full inculturation center. For some inculturation is a good thing after Vatican 2 in Christianity where the European cultural way is making way for native - here Hindu, cultural way for Christians. For those who oppose this, it is a process of stealing from Hinduism. We can have that debate some other time, but let me just narrate the experience there.

Everything is "Hindu"ised here. From names of buildings to dress to window pane drawing to gopura (top of Chapel).. I mean everything! Building names are Sacchidananda, Brahma vidya, Shanti sadan etc. You won't find a saree wearing Mother Mary sitting in padmasana, with and Indian dressed baby Jesus like this anywhere else in the world. 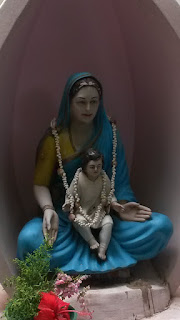 Here, the resident sister explaining the central point of the Chapel. The whole building and the central God and Jesus concept is built on Hindu Kundalini Chakra concept. It is just narrated in a different way, which you might not find in the Bible.


A Catholic lady from Mumbai who was with us, explained that at the start, Christians find it difficult to pray in a place like this with Indianized (Hindu-ized) symbols. But later they feel much more home than a European style Church. I was explained how multi cultural symbols are so essential for Christianity in today's world. I talked to a few Fathers/priests too who told the same thing. There are courses conducted here in inculturation for Christians from around India.

The next stop was by mid day to Sikh Gurudwara. Here, cloth over head is mandatory. They provide it right in the front, and even tie to your head if you wish. I found the discipline of Sikh devotees simply amazing. Men, women and children come inside in strict lines and bow before the Granth Sahib (holy book). There's a Granthi who reads from the Guru Granth Sabhib book. There were narrations in Punjabi language on heroes of Sikhism, how weapons are needed for self defence, how to sing Kirtans and praise the Gurus and more. I think the term for singing before meal was Ardas. I also saw people having a small knife as a part of the 5 basic tenets of Sikhism, called Kirpan. Women too had turbans in some cases.

This is one place where we spent maximum time. I heard many songs or Bhajans. They were sung melodiously and they were so close to how we sing bhajans at Hindu temples. Again, I found this just another Dharmic place, but we are told it is a different religion. I felt completely at home even though I understand only basic Punjabi.


The most impressive part of Gurudwara was after the soothing prayer session. There is a community kitchen called Langar, where anyone can go and prepare food. There is free food served for anyone who comes, no questions asked. Just keep a cloth over your head and take food obediently the way everyone else takes. I was amazed at how 100s of people, men and women - went about contributing to food preparation. The amazing discipline in preparation, serving (every serving is praised on Wahe Guru), and cleaning up. It's like you can be anything in this Gurudwara. You can sing, preach from the holy book, clean, cook, keep shoes, volunteer at gate... anything! A truly open system. 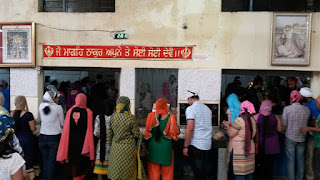 I had never seen in my life, well to do middle class people coming and cleaning up plates after lunch, with bare hands. Never.. These are well to do middle class people. I literally saw people using thumbs to wipe out the plate after we ate, to remove every single grain or vegetable piece onto other containers. They probably don't waste a single grain. Just amazing! And next step was another bunch of volunteers cleaning up with water and making the plates ready for the next round. 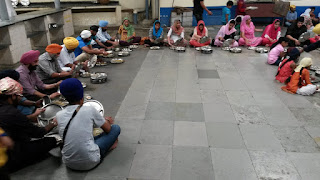 After enjoying a great prasad (offered food) at Gurudwara, I was thoroughly satisfied with what I saw. The discipline and Bhakti at a Gurudwara is something you just have to see for yourself!

The final stop for me was the Sunni Muslim mosque. It's a big and grand mosque built not many years ago. We went at a time when Muslim prayer, or Namaz was not being read. So we had a chance to go on a guided tour, well conducted by a friend of mine, Syed. Head cloths over head are mandatory during prayer, but was kept optional for visitors on guided tour. Also, for women, there is a separate prayer hall opposite to the main mosque. 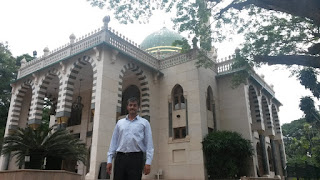 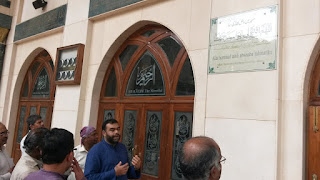 Unlike other places of worship we visited, this Mosque had lots of questions from the team. People asked questions right from namaz direction, to where women assemble, to what's inside Kaaba etc. Syed answered everything very patiently and showed us things. Right from Wazu, where you use water to clean before prayer, to how prayers work, how many times, why pray, what are the key tenets of Islam and much more.


The team came out much more educated about Islam after this trip. Of course, we were served nice soft drinks and biscuits outside the mosque.

In summary...
The pilgrimage was later going to Hindu place of worship after this, but I had to drop out due to another engagement. I am not unfamiliar with Hindu temples and ashramas anyway :)

All pictures in here if you have more time.

Some more videos if you want to watch:

So here is the final collage.. A memorable day wherein I learned a lot about fellow Bharatiyas! After all, we are all very close to each other as humans, and once we understand the differences clearly, we can find ways to co-exist with minimal friction. The primary goal of every mode of worship is to make you a better human. That's what is Sad (good) Bhavana (feeling or intention) :) 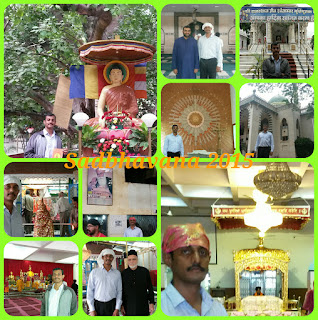 Try it once.. You can do it yourself, of go with an organized pilgrimage. Contact Ashirvad, 30, Saint Mark's Road in Bengaluru for the next trip.