I am now reading the Land of Seven Rivers book by Sanjeev Sanyal. Some interesting facts about Saraswati river and origin of name "Bharat" follow. I will be brief, as I don't want to type the whole chapter 2 of the book here. You have enough material here to get inspired and read the full book yourself :)

Saraswati was the mightiest river of Indian known history. Even Sutlej and Yamuna were tributaries of Saraswati. 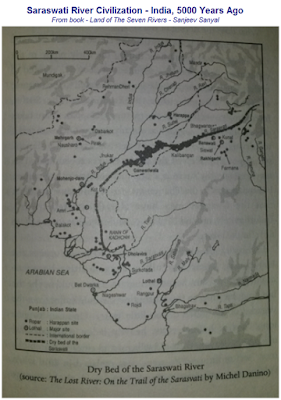 Archaeology talks of Mohenjodaro (Mound of the dead), Harappa, Dholavira and others of Indus valley civilization. Rig Veda was part of the same civilization. It was not some horse mounted "Aryans" came from central Asia and destroyed this, by attacking the "Dasa" or "Dasyu" people. In fact, the greatest Aryan king of Rig Veda is a person named Sudasa. His name and his father's name has 'dasa' in them! Arya was never a racial thing. It meant, polished or sophesticated.

Harappan or Indus Valley civilization stretched from 3500 BCE till 1400 BCE. "Aryan invasion" from north west is a myth. Drying Saraswati ended Harappans and not any invasion.

Rig Veda praises the might Saraswati river at least 45 times. Ganga only twice & Sindhu (Indus) rarely. It's very obvious that Veda was composed near Saraswati, and not anywhere outside India carried by "invaders".


Anyone who studies Rig Veda's Nadistuti Sukta, would immediately reject "Aryan invasion" theory. It's that clear!

Rig Veda was definitely composed before 2600 BC when Saraswati was flowing mightily. Also, no mention of iron, so it was bronze age.

There is a major battle called the Battle of ten Kings in Rig Veda: Sudasa of Bharata tribe under Rishi Vashishtra, fought 10 kings under Rishi Vishwamitra's guidance.

Trtsu-Bharata tribe fought  these tribes:
Battle of ten kings of Rig Veda was the start of Indian civilization. Bharata tribe (from Haryana) won. India became "Bharata Varsha"! In a way, we are all Haryanvis in some way :)

Sudasa under the brilliant leadership of Rishi Vashishtha, won and became the first Chakravarti of Bharat (India). Chakra (wheel) varti means his (chariot) wheels can go anywhere. A true monarch!

4600 years ago, a great earthquake & after effects, made Yamuna move east to Ganga and Sutlej west to Sindhu (Indus). Saraswati dried up gradually, killing the first major urban civilization of India. Harappans or the Vedic people started migrating east towards Ganga and west towards Sindhu in large numbers.

The end of Rig Vedic era is very close to the end of Harappan civilization. Essentially, Vedic was a part of bigger Indus valley area.

It's most likely that victorious Bharata tribe invited Rishis from all tribes to meditate and compile Vedas on the banks of Saraswati. It happened over generations and finally we have the Rig Veda. All of today's Indian subcontinent is culturally linked to Bharata tribe of Rig Veda. It became Bharata Varsha or the land of Bharatas, later becoming "Bhaarat" - 1st major civilization of India! Frankly, I learnt about the exact detail of Bharat only today!

Again, my special thanks to Sanjeev Sanyal for amazing research in the Land of Seven Rivers book. Now back to reading further chapters:)

a) When I said, The end of Rig Vedic era is very close to the end of Harappan civilization. Essentially, Vedic was a part of bigger Indus valley area, a friend shared that this is factually correct. Nicholas Kazanas provides hard proof -> http://www.omilosmeleton.gr/pdf/en/indology/RPSSC.pdf

b) Another friend says - Even Shrikant Kalgeri gives good evidence in this regard. Just Youtube for links.

c) Then a friend says, the battle of ten kings in Vedas is nicely described by Ashok Banker in his novel Dasarajna.

d) Another friend commented on the Bharata tribe part. He says, presume you would have listened to the "Bharata Darsana" by Sri.Vidyananda Shenoy. He reiterates the same fact.
Here is the link to Bharata Darshana amazing series of talks in Kannada -> https://soundcloud.com/vasishta-shastry/bharatha-dharshana-vidyananda

e) Another friend shared - Here is an article from IISC journal Current Science : Saraswati – the ancient river lost in the desert - http://www.iisc.ernet.in/currsci/oct25/articles20.htm

It just kept coming.. My twitter friends are just amazing. I stopped taking links after this :)
Posted by Kiran KS at 10:28 AM