Yesterday  the Supreme Court of India came up with a very significant judgement.

It was a long process and involved judgment, but the summary was this.

And a few of this morning's front pages in Kannada news paper world.

"Kannada Medha", roughly meaning the sacrifice of Kannada.
"Public opinion is that this verdict is against the very concept of linguistic states"
"Central government (UPA) has kept mum on this topic"

"Can't force medium of education says SC"
Overall, a situation of gloom in Karnataka. 6 to  8 news TV channels in Kannada were abuzz since yesterday itself that this is a big setback to Kannada language.


Before anyone starts wondering why I am writing this, the issue is closer to my heart. I am a product of Kannada medium schooling and it worked very well for me even when I switched to English medium for higher education. My medium of education never became a hurdle even when working in top levels in IT industry for long number of years. In fact, the ease with which we could pick up Maths, science, social studies etc. when taught in our mother tongue, was something I am quite happy about.

In my view, most Kannada papers and news channels are overreacting. Activists are also over reacting. Supreme Court's constitution bench has quoted Article 19 (1) to arrive at this judgment. No government or organization can go against the constitution.

Secondly, this is not anything specific to Kannada or Karnataka. The same judgment will be held as a benchmark, like the SR Bommai case in article 356, for other states too in the future. This is a landmark judgment that will have long term effect.

Thirdly, there is no need to beat the chests that there's been a "defeat" or "setback" to Kannada. Look at the actual reality. Nearly 74% of the one crore students in Karnataka are ALREADY studying in Kannada medium. All the government has to do is to make sure that the quality of education for these folks, plus those 6% studying in other Indian languages, is at the same level as the 20% who are studying in English medium. Can they do it? That's the big challenge. 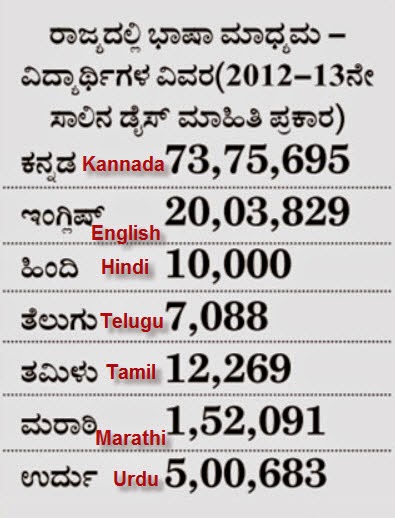 Fourthly, the state government already has control over 69% of the schools in Karnataka. They are either fully government owned or government aided. Made the quality of education in here top notch, and the 2 to 3% shift happening each year to private schools will slow down. Why do parents send kids to private schools that mostly teach in English medium? Because they want "better" education and "better" career. If the government or aided schools can provide the same at competitive levels, who would pay higher amount to switch to private unaided schools anyway? 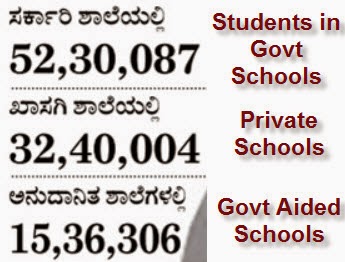 Fifthly, India has nearly 1400 mother tongues. When a continent sized country with so many mother tongues are in place, it is extremely difficult to come up with any kind of language formula. The three language or two language formulae have to factor in the important fact that English is as Indian today, as any other Bharatiya language. Take the examples of Poschim Bongo or Uttar Pradesh. Opposing English just won't work as ordinary parents for the past 3 generations are seeing English as a way for their children's "better" career. The governments need to understand the "better" part well. Then everything will fall in place. So far there is no practical linguistic policy for schools, that make every Indian boy or girl go through equal linguistic difficulty level, yet practical enough to earn living in the future. Presenting here a quick summary sheet on the language categories of India that I had prepared earlier. There may be crores, or even 10s of crores of Indians who might not have practical access to their mother tongue medium of education, strictly following the freedom that the Supreme Court outlined. In my view, crores of children already might be forced to go through a medium of education that is already violating the Supreme Court's judgment, across India. 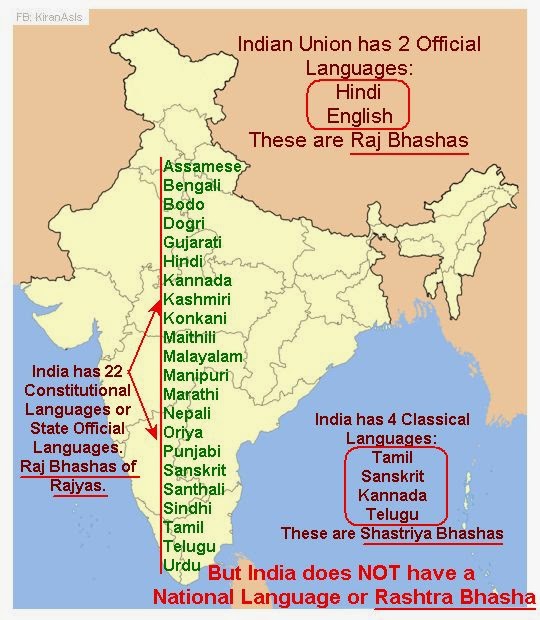 Lastly, no one is opposing teaching Kannada or other language. The issue is with forcing the medium of education. If a large group of people, like 25 to 35% in the state now, mostly in urban areas, see a value in English medium education, the governments and activists have to sit back and think.
What needs to be done?

It's time for experts to talk to 1000s of parents.. Maybe lakhs. Find out what is working in English medium and why people are even willing to fight for 20 years in courts, all the way to Supreme Court to oppose imposition of medium by the government?

I feel that the majority of the parents won't be against Kannada or other Bharatiya langauges that they speak at home. Their focus will be more business oriented. Investment on their children for a better return for them and children in the future. When a vast chunk of urbanized parents, and now even semi-urban parents, are thinking in education as investment, the government has only ONE option. To make the schools under its control supremely competent a global level. Then everything will fall in place. That's my opinion.

What do you think?