Strategy Details That Made Israel Win The 1967 War

Yesterday, I got a chance to watch some truly breathtaking videos about the 1967 war between Israel and the Arab neighbours like Jordan, Syria and Egypt.There is already well documented detail in the Wikipedia on this Six-Day War, with nearly 300 references, pictures, maps, links etc.

No, I am not a military strategy expert. I am not writing here the sequence by sequence of what exactly happened. But what I am going to highlight are the subtle tactical advantages Israel developed, which made it win the war in just six days, against incredible odds! Even the massive nations like China, Russia, India, USA have struggled for a long period to win, or come anywhere closer to a win, in wars.

So how did this very tiny nation of Israel do it in 1967? The details that I would be highlighting are from these six-part videos. They elaborate on how Israel's focus on details changed the balance towards it. Every army in the world is a professional unit, but the subtle strategic observations and tweaking, makes a huge difference in the final outcome. You can watch them when you get a chance. Whether you get time to watch them or not, if you read further here, you will get a clear idea of the importance of strategy.

The Odds Against Israel: 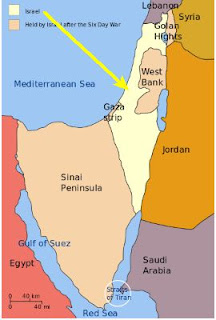 So how did Israel pull off a spectacular victory, that too in straight 6 days? It was not the numerical superiority in planes, tanks, soldiers or guns.. but it was the tactical and strategical superiority built over the years. A classic case of how a nation can win, even when it has huge disadvantages described above.

Here are my top-10 strategical picks as to WHY Israel won so brilliantly:

All these picks were instrumental for a 1967 war. They were out of the box-thinking for that era. Keep that in mind. Many of these need to be improvised if they need to be used in 21st century.


A: Offence, the best form of Defence:

The most critical decision Israel made, when the war was inevitable with much bigger and better equipped enemy, was that YOU start the war. You hit where the enemy is expecting the least, and when the enemy is expecting the least. This is easier said than done. Israel had only 206 aircrafts in 1967. Even the most experienced NATO under US guidance, would not run more than 3 missions per aircraft during a war, per day. But Israel decided to run up to 5 missions per day.

And how did they do it? They worked very hard on the logistics. They decided that making the ground staff efficient and quick, is the best way to send the flight back after one mission. This training and care for detail paid off. Planes ran 5 missions during the all important day one!

If Israelis had waited for the enemy to attack first, they probably had no chance to defend.


B: Aim for the runways first, not the planes:

This by far clinched Israel the war. When the enemy  had more airstrips, and many more aircrafts, plus they already surrounded you from three corners, how can you win a war? Israel's answer was ingenious. They decided to not attack the planes of enemy first, but the airstrips. If the airbases have blown up airstrips, there is no way planes could take off. The next step would be to eliminate the the "sitting duck" aircrafts. This was not easy, they had to take off over 50 airstrips of Egypt within hours of day one. This had to be done with precision, speed and surprise. They did it! 80% of the runways and planes of Egypt were blown up in 12 hours, straight.

Once you gain air superiority, you have won half the war.

C: Air strike from the direction when the sun is over the horizon for the enemy.

This one was unbelievably well researched and orchestrated. Israel had to take pick a time to attack Egypt's aircrafts at Sinai desert first. They collected a large quantity of intelligence first. What time aircrafts are at high alert from Egypt side, what time they are at the base, how the shifts work etc. Finally they zeroed in on 7.45 AM on June 5th. That is the time during  June, when the sun is shining bright in the eastern horizon over the desert, making it very difficult to see that way. With Israel coming from North East, they would be making it very tough for Egyptian military to stare at them in the eastern horizon. They took the gamble. We will go all out attacking, at 7.45 AM taking the natural geographical advantage. They also had computed that at dawn, aircrafts of Egypt would be at high alert, but after some time, planes come down, personnel change, fueling happens and so on. Essentially, with years of intelligence, Israel had computed a window that would give them almost 100% airspace, with all Egyptian planes on the ground. And boy... didn't they cash on this home work perfectly?

Another big challenge was to keep the surprise factor. Before the attack Monday, Israel had pretended to drop the guard, by sending soldiers home for the weekend. Pictures of the them swimming & having fun with family was in Jerusalem Post. Arabs were a bit relaxed even though they were the one planning to attack first. But when Monday morning came, Israel had launched an all out war. If the Egyptian radars caught the Israeli Mirage planes heading towards Sinai, the game would have been very tough. So Israel approached from the sea. Flying at over 500 miles per hour speed, these war weapons had to keep an altitude of less than 100 feet! At that speed, it is a miracle that they didn't crash to the sea. Aim at the horizon, fly dead straight and not a second of distraction looking right or left. They practiced it and flew to perfection beating Egypt radars.

In any war, if you are attacking, a numerical advantage of 3 to 1 is preferred. Otherwise, you will see lots of casualty. But here, Israel was in the reverse. It had a 1 to 3 disadvantage against Egypt in terms of tanks and other artillery. So they had to find very unique methods to even attempt this war beyond air strikes. What they did was phenomenal. They studied the desert terrain meticulously. They modified their M51 Sherman tanks, which were one generation behind Egypt's superior T54 and T55s. They modified them precisely to scale tougher sand slopes, get more traction in the loose sand, sustain heat and much more.

F: Map the desert and trap the retreating enemy:

Then, they created a very detailed map of how to approach the desert, in a way they would surprise Egyptians and hit them from areas where they least expected. These preparations paid off. The roads or approaches from which Egypt expected Israeli tanks, were not used. Instead they used approaches that gave them strategical advantage.

Most importantly, they planned and anticipated the routes that Egyptians might take, if they have to retreat. Egypt troops were trapped between Bir, Gidi and Mitla passes.This was to cause maximum damage and force the enemy to surrender quickly.

Napalm was the game changer for Israel here. Since Israel had achieved air control almost 100%, they could strike at will. Once the initial tank war resulted in heavy losses, Egypt was forced to retreat. As Israelis anticipated the routes of retreat, they trapped Egyptians and used Napalm bombs.  These were modified jelly bombs with thickening agent reinforced, which caused extensive damage by keeping the fire going even after the initial explosion. Again small innovation, and big payout.

H: Water, water and water. Drink lots of it: 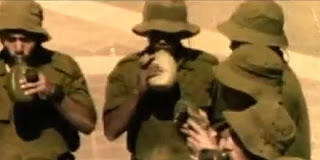 In 1960s, drinking a liter of water per day was the norm for soldiers in wars. Since most wars were in Europe, the cold conditions had brought in these norms. However, Israel improvised drastically here. They brought in one liter of water per hour method in the hot West Asian desert climate. This was revolutionary for that era. With months of such preparation, even at 20 liters of sweat per person, per day, Israelis could fight out in the heat. Even though Egyptian soldiers were also very familiar with the terrain, they lacked this particular knowledge.

This made a huge impact in the Sinai desert war. When Egyptian infantry and tank personnel had to retreat, they had to walk up to 200 KM in hot desert. They neither had the one liter of water per hour practice, nor they carried that much supply in the appropriate containers. So the dehydrated Egyptian soldiers suffered huge losses.

With Egypt and Jordan taken off, with Jerusalem in its kitty, Israel had to scale the Golan Heights. If this is captured from Syrian control, Israel would have a big advantage in keeping Syria from invading Israel. But these mountains were trenched, hard and setup with three layers of defence by Syria. The only way Israel could even make an impact was to get confidential information on the artillery positioning on top of the mountain, as well as the trench information. This is where the most famous spy agency Mossad came into place. Eli Cohen was the most famous spy of Mossad, who used his Egyptian upbringing to infiltrate Syrian military deep inside. He passed on valuable information to Israel, but his biggest contribution was to convince Syria to plant trees next to trenches, for shade, so that soldiers were not sun-burnt.

Eli Cohen got caught eventually, and was publicly hanged by Syria in a televised event. But his life did not go in waste. Syria had been trapped to setting up trees next to trenches in an otherwise bald Golan Heights mountainous terrain. Israel exploited this info to its best advantage firing exactly where they had to, causing maximum damage to Syria, in a very short time.

J: Know which gun to use and where:

This may sound very trivial, but Israel paid attention to detail. When Syria was using the legendary AK-47 Kalashnikov assault rifles, Israel bought and customized Uzi 9 mm light sub-machine guns. Any military officer would have been perplexed with this as AK-47 was far superior in hitting the targets, but Israelis knew why they picked Uzi. The war was not going to be in the open areas, but in close cornered trenches. They needed a gun that would reload quickly, maneuver quickly and easy to shoot at short distance. Such a vital plan was rehearsed and well executed, giving Israel the coveted Golan Heights pass.

When you sum all the strategical advantages created by ingenuity, you will understand how a tiny little country won against massive odds, that too in six days straight.