Today, got a chance to hear the very well informed Dr. Narendra Jadhav. He's an expert on Babasaheb Ambedkar's letters and policies. He's also an expert in Indian economics. He has written 30 books in multiple languages. You can browse more about his illustrious career or visit his website that has plenty of information. 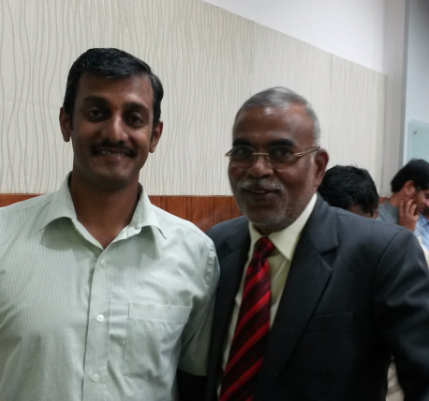 I gathered some very nice points from his talk. They are as follows:

a) Dr. Ambedkar was fluent in Gujarati too, apart from Marathi, Hindi and English. Most people will recognize BR Ambedkar as the constitution formulator and a strong voice against untouchability in India. But very few know that the real forte of this multi faceted man was economics. Dr. Jadhav is a great resource on Dr. Ambedkar and his economics lectures.
b) BR Ambedkar has given a total of 537 speeches in his life in 4 languages. And Dr. Jadhav has compiled all of them in his English series of books. Now planning on releasing a Hindi version by December 6th, after the Marathi versions were done.
c) After independence, PM Nehru announced that India would double it's per capita income every 10 years to double the standard of living levels. But in reality, between 1951 and 1986, India's per capita income grew only at 1.2% (growth 3.3% and population growth 2.1%). At that rate it would have taken 59 years to double India's per capita income. In comparison, China doubled in 10, Korea in 13, Malaysia and Indonesia within 2 decades!
d) LPG stood for Liquified Petroleum Gas till 1991. But soon, PV Narasimha Rao's policies made LPG stand for Liberalization, Privatization and Globalization.
e) India in spite of 16 to 17% of the world's population, only had less than 1% of the world's trade in 1991. So the fear mongering against liberalization was silly. 99.5% of the world's trading economies would not "gang up" to harm an economy that formed just 0.5% of the world's trade.
f) When Deng Xiaoping was asked how come you are liberalizing the economy being a communist, he said, I don't care if the cat is black or white.. as long as it catches mice, I will take it!
g) Post liberalization, Indian economy grew at over 6% between 1992 for over a decade. It peaked at nearly 9% in 2007-08. Without liberalization it would not have grown anywhere near it.
h) Europe is facing severe economic crunch. The larger economies have exploited the smaller ones. PIIGS = Portugal, Italy, Ireland, Greece and Spain, are disasters. Now all packages to save them.
g) India is at once in a very long time (centuries may be) kind of Demographic dividend advantage right now. India's average age now is 24. It will be 29 by 2020. By then, China would be 37, USA 38, Western Europe 42 and Japan at a disastrous level of 49. All these regions did very well economically when their demographic dividend was suitable. That means, more hands to work and less dependents to feed. Automatically, the savings would be highest during such situations. India has that opportunity of favourable demographic dividend for the next 15 years. If India messes during these 15 years, this would become Demographic Disaster.
h) The one important factor that Narendra Modi government must focus on during this Demographic Dividend window is the Social Sector - Education, Health and Social Amity. Unless these are taken care of, high growth can not be sustained.
i) In India, the education sector needs to be streamlined in order to realize Modi's dream of better skills for all youth. Right now, the ITI (technical training) is under one department while the general education (non technical, but engineering included) is under another department. This friction between the department of Labour and Department of HRD needs to be resolved.
j) Modi has announced a new department called Ministry for Skills development. This is a great step and a first time ever in India's history. However, this is having a Minister of State leading it, which might make it less efficient when cabinet level Labour and HRD ministries are at friction already.
k) There's a priority Schedule Caste and Tribe funds allocation per department as mandated by government policies. If the state has more SC/ST population than national average of around 18%, they must allocate more by department. But neither the center, nor the states have implemented this till date, in spite of demands for decades. Out of the 68 departments in the prior UPA government, only one had even a line item for SC/ST separate fund account.
j) Regarding black economy, India needs to think of the root causes and solve them. For instance the gold rate differential was 65% more in Mumbai 10 years ago. The 500 gram per head gold import reform of Manmohan Singh made it go to 15% making it unprofitable for smugglers. Similarly, we need strong laws in drugs and other areas to stop the hawala network. Just adding more police will only increase more corruption, and won't solve the problem.
h) Lastly, a very little known fact is that while Ambedkar was the man who initiated skill development in public sector, it was Tagore who initiated the skill development on the private sector via Sri Niketan after his Shanti Niketan project.

A good learning experience, from a very learned man!
Posted by Kiran KS at 7:55 AM