There was a discussion.. Which languages did Bengaluru speak historically? Who built Bengaluru?

Since I am born and brought up in Bengaluru, I have seen right my childhood many languages and regions trying to “claim” that this city belongs to them :) So nothing is new in asking such things, but maybe this would give you opportunity to learn more on this amazing city of India that is contributing Lakhs of Crores towards India’s economy today, each year.

Let me take you back a 1000 years and give a tour of Bengaluru's history.

Start with Gangas: Ganga (shown in the map below yellow region), was a formidable south Indian kingdom 1000 years ago. Their capital was initially north east of Bengaluru (Kolara) and then moved to south west of Bengaluru (Talakadu). History of Bengaluru starts with Ganga period. 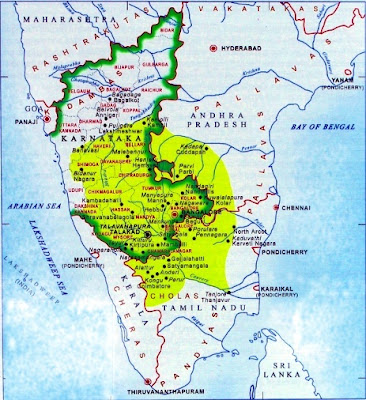 Then came Hoysalas. The territory of Bengaluru was under Gangas till then, but no city or town was in place. About 900 years ago, Veera Ballala, the Hoysala King lost his way during a hunting expedition in today’s Bengaluru area. It was a semi forest then. An old lady cooked beans for the king and served the hungry man. He was so delighted that he called that place, Benda kaal-ooru in Kannada (ಬೆಂದ ಕಾಳ ಊರು), literally meaning in English, “the town/city of boiled beans”. That’s the most popular story of how the name got stuck. Later BendaKaalooru became Bengaalooru and then Bengaluru. All three have the same meaning in Kannada - the city of boiled beans.

Still it was nothing more than a small village then.

Then came Kempe Gowda 1. He was a paale-gaara (feudatory) of the mighty Vijayanagara kingdom,which was ruled from Hampi in the center of southern peninsula. Vijayanagara was the biggest Hindu kingdom of India 500 years ago. It’s capital Hampi was the richest city in India 500 years ago.. Maybe it was among the 5 richest cities of the world reading the chronicles of how they sold precious stones on street sides then. Vijayanagara was a Kannada and Telugu hybrid kingdom, with both languages passionately claiming the mighty Krishna Deva Raya - a good thing in India :) Maybe even Tulu people might join the claiming race soon! As you can see, Vijaya Nagara (City of Victory) occupied almost the entire south India, with extensions going into Goa and Odisha at the peak. And Kempe Gowda being a part of Vijayanagara rule, had his hand in the geographical center, including the future gold mine, Bengaluru. 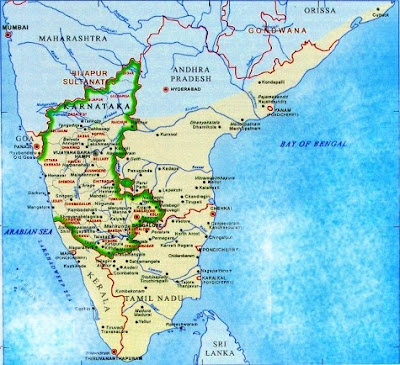 Kempe Gowda built four watch towers marking the four boundary poles of Bengaluru.
Today, Lal bagh still exists. You can go see the tower there. For the rest, you have to search a lot.
If you walked around the Pete (in Kannada pete - ಪೇಟೆ - means shopping area) area of Bengaluru three centuries ago, this is how you would have seen. Even today, most of these Pete’s exist, with many remarkably doing the same kind of business their great-great-great fathers did centuries ago!
Bale-pete means bangle market and Akki-pete means rice market. Every pete is either named after a commodity name in Kannada, or a community/caste that did business there. Uppara, Ganiga and Tigala are all community/caste names in Kannada. Today, the most famous police station near the central Majestic bus stand is Upparpete police station, retaining the historic name! 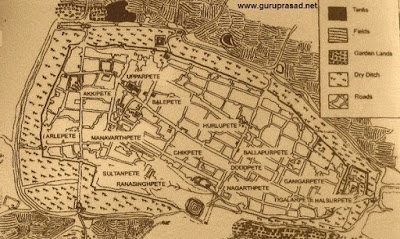 Then Bengaluru picked up growth well. A fort came up in the center. Got reinforced. Marathas had their share of building the city center. Hyder Ali and Tipu had their share of building. Some small villages that existed with Chola influence in the north East (near Halasuru) got absorbed into the main city. This area Halasuru derives name from Halasu + Ooru meaning the town of Jack Fruit trees. British pronounced it Ulsoor. By now it was a very cosmopolitan city with great weather, good commerce, well protected and many languages. So people started coming in from all corners as it was the geographical center of south India.

This was Bengaluru about 250 years ago. Today, this circle is within the central 25% of the city. 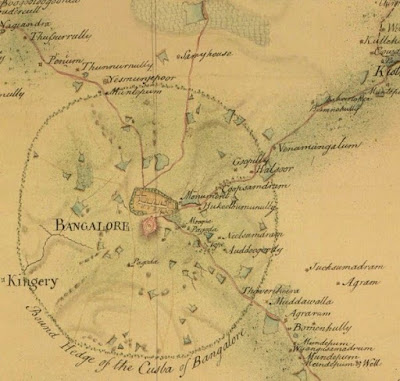 Kempe Gowda’s city was absorbed into Mysuru (Mysore as British called) kingdom ruled from Srigangapattana (later Mysuru). This was after Vijayanagara collapsed and Hampi was ransacked and pillaged by Sultanates of Deccan plateau. What started as a small Mysuru (in yellow below), grew in strength and peaked by 1782 when Hyder Ali had taken over from Wodeyar rulers. Hyder Ali was employed by Wodeyars, but he tricked his way into taking over a kingdom. At the peak of Mysuru, the boundaries reached well into today’s central Telangana, half of today’s Tamil Nadu, half of today’s Rayala Seema (AP) and northern Kerala. It did not however contain the northern edges of Karnataka, which were firmly with Sultans/Nizams of Deccan. Bengaluru started growing rapidly during this phase with palaces, forts, gardens, trade etc. 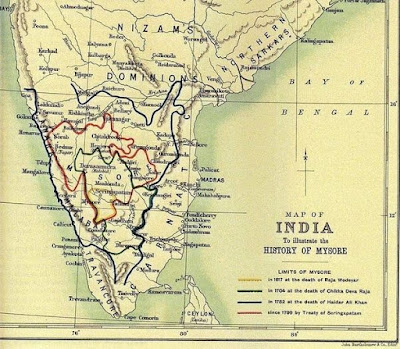 Then Tipu died fighting the British in a series of wars at the end of 18th century. That was the biggest turning point for today’s Karnataka region. British divided the Kannada speaking areas into many dominions. They gave away the north western parts to Bombay (Marthas), North East to Hyderabad (Nizam), south west, south and south east to Madras (British). The might of Kannada empires since 4th century CE on the western part of south India collapsed. Mysuru became a landlocked dominion of the British empire and struggled over the next 150 years. Kannada speakers got spread out into multiple provinces/states losing unity and cohesion for the next 150 years. Since the original question was related to Tamil, you can see that today’s Coimbatore, Erode, Krishnagiri, Hosur, Palghat (Kerala now), Ooty etc. were all a part of Mysuru before British took them over, and merged with Madras. That was a big turning point in the history of south India, languages, rivers etc. Even the Mettur dam region in Tamil Nadu today, the biggest dam on Kaveri river, was a part of Mysuru kingdom a little over 200 years ago. Most of today’s south India’s river sharing, border overlaps, linguistic fights etc. have roots in that major surgery that British did.

Source: The Tiger and the Thistle

Then what British did was to let Mysuru keep the Bengaluru city proper (the Pete area we talked about above). They build a big garrison and new cantonment in the north east of the city. They loved the weather of the city and lived in the cantonment. Since their capital was Madras in the south, they brought in lots of Tamil and Telugu people into the cantonment for various army and service related jobs. The oldest engineering regiment of Indian army today, is incidentally from the same cantonment area of Bengaluru (Madras Engineering Group), which is right next o Halasuru lake! The map below is from 1914, by which, the new MG Road had clearly divided the older Pete city of Bengaluru from the new cantonment area of Bengaluru. 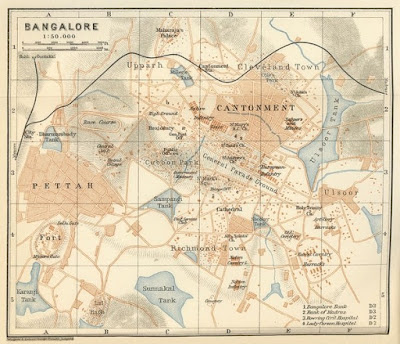 Then the city grew immensely after independence - primarily due to the availability of technical resources, education and great weather. Today, the city is the second biggest in India in terms of area (after Dilli/NCR, though they have multiple municipalities), having 198 wards. The older pete parts of the city are hidden in the central ward around 109 (Chikka pete). The cantonment area of British is around ward 90 (Halasuru). The city has grown on all 360 degrees, almost reaching Tamil Nadu at ward 192 and 191. In the north it is growing so fast now, that from the international airport in the north, you can travel to Andhra Pradesh border faster than the southern edge of the city! 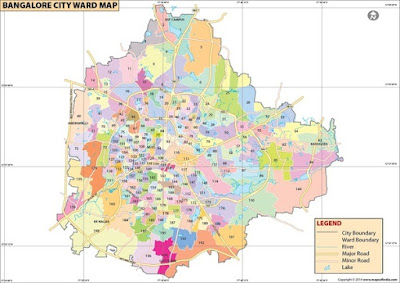 The city has grown so big today that you can almost walk to Tamil Nadu (Hosur) in the south East from ward 192 (Begur). It is just around 10 KM and in another 5 years, the city might actually grow right to Tamil Nadu border!

Hope this long explanation gave you a history of Bengaluru and Karnataka, how it got the name, historic pete parts that thrived for 400+ years, historic boundary, British arrival into cantonment, migrations and the 360 degree growth today.

In summary, Bengaluru has always been a Kannada speaking city since Kempe Gowda’s times. But it has absorbed Telugu, Tamil, Urdu, Malayalam, Marathi, Tulu, Konkani, Hindi and much more over the centuries. Today it has the largest population of migrants from North Eastern states in south India. I don’t remember ever from my school days long ago, when we had less than 5 languages in our class room :) During my college days, I remember just in 5 KM drive from Majestic to MG Road, I could see Kannada, Telugu, Hindi, English, Tamil and Malayalam movies in theaters, all running house full!

So it is a a city for everyone. Respect the diversity, respect the willingness of the city to absorb people from all corners of India, and still keep harmony for most part.