Jammu and Kashmir - A Reality Check

Every day I keep seeing questions on Jammu and Kashmir. Who does it belong to? How did we get here? What are the solutions? Who is to blame?

Let me answer the four most pertinent questions:

Pakistan is a country built on a faulty foundation. The 2 nation theory wherein Muslims can't live with Hindus (mostly) was their firm belief. But after losing Bangladesh due to their own crime, that theory is now flushed. Also, the gradual prosperity of Indian Muslims, who are living with Hindus well for most part, has shocked the 4th generation of Pakistan since independence. Economically, Pakistan is nothing in front of India. Pakistan's economy is much less than just one state of India, that is Maharashtra.

The only thing that is keeping Punjabis, Sindhis, Pathans, Baluchs and others is the artificially created hate against India (victim hood). India will be able to improve relationship with Pakistan only to the extent of keeping away mad Generals of Pakistan from actually triggering the danger buttons on missiles. Beyond that, it is more of a stick, carrot, stick, carrot... relationship. Because you can't have perfect relationship with someone whose only dream is to destroy you.

Part 2) What is wrong with Kashmir, the Kashmir people, Hurriyat, and the governments of India and Pakistan?

Basically who is blaming whom..

There is nothing wrong with Kashmir. What we have is a dispute cultivated by Britain and USA, during 1940s and early 1950s. Now it is an issue cultivated by China for its economic benefits and access to Arabian sea and Indian ocean via Pakistan. Even after 7 decades, there is no end in sight.

Kashmir is generally a term used for the whole of Jammu and Kashmir state. The state as it was in 1947, is a big one. Today, 60% of the state is within India, even after the Maharajah who ruled in 1947 (Hari Singh) formally signed an accession document to merge his state into India, like 100s of other Rajas. Pakistan has control of 30% which it invaded in the form of "tribal" invasion. China has control of about 10%. China might have a bit more than 10% as, Pakistan in 1960s "gifted" a lush green Shaksgam valley in the north, to China.

The Maharajah of Jammu and Kashmir princely state signed with India in 1947 an instrument of accession. That's it. J&K belongs to India eternally or at least close to eternity :)

This map  (and another map in Part 3) shows approximately the areas held by India, Pakistan and China.
PoK = Pakistan Occupied Kashmir and CoK = China Occupied Kashmir.
These are standard terms used in Indian parliament. Some also use PoJK and CoJK. 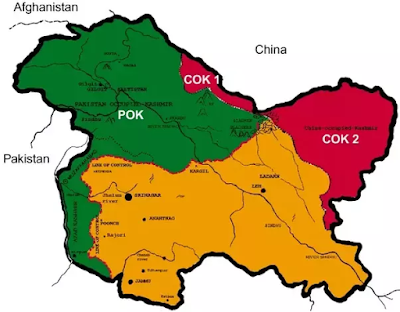 Now coming to "Kashmir".. there are five distinct parts of Jammu and Kashmir state.

1) Kashmir valley - Small valley around Srinagar.
2) Jammu - Southernmost part of J&K. Most populated place.
3) Ladakh - Eastern Himalayan hills. Has the world's highest motorable road etc. Very sparely populated.
4) Pakistan Occupied Kashmir (PoK): This has two distinct parts. One is the southern strip along India's Kashmir valley, which Pakistan calls as "Azad Kashmir". Then the bigger northern part which is Gilgit and Baltistan. Now-a-days, these two areas - Gilgit and Baltistan, are together termed as Northern Areas.
5) Aksai Chin (CoK) - North Eastern J&K under China's control since 1962 war where Chinese walked into this area. Aksai Chin is almost a desert where no one lives. China also controls the lush green Shaksgam Valley (CoK 1 in the map), "gifted" by Pakistan in 1960s, in return for things which you can imagine.

Only two of these five places actually have protests and people movements today. That is Kashmir valley within India, and PoK or Azad Kashmir in Pakistan. The former is larger and louder. The latter is smaller, but simmering. Kashmir Valley has separatist groups under a Hurriyat banner, which represents overall less than 5% of the overall Jammu and Kashmir. But media projects them as the true representatives of "Kashmiris". Some of them want to become independent and some opt for Pakistan. On the Pakistan side, low key movements are there to join India. They are not given much publicity in media.

So if you look at the overall picture, majority of Jammu and Kashmir is peaceful or without any movements today. It's only the 10 to 20% of the overall state, centered around the valley, that has disruptions. There are zero problems in the large populated part of Jammu and Kashmir state, the Jammu region. Jammu is predominantly Hindu and Ladakh is predominantly Buddhist. That might explain why those regions have no issues with India.

India blames Pakistan sponsored terrorism and support to separatism for all the problems.  And they keep coming inside India regularly. Almost every month you will see a gun battle, with cross border infiltration bids being stopped. You also see many demonstrations in Kashmir valley, with Hurriyat groups mobilizing 1000s of Kashmiri Muslim youth to come against India. India's claim is, just like 500+ princely states that signed the accession document, J&K also signed. So the whole state legally belongs to India. That is the final settlement.

Pakistan blames India for all the trouble. Pakistan talks of occupation by India. Pakistan goes back to 1940s and 50s when a three step process was discussed. It shows that India had agreed to do a plebiscite for the whole state then considering a war situation. But India says that one of the pre condition put by UN was that Pakistan should withdraw from all the areas of Jammu and Kashmir that it had army on. Pakistan refused to withdraw its troops. So India conducted democratic elections in its part of J&K and the matter is closed since then.

China does not openly blame much, but quietly sides with Pakistan. After all China got parts of Jammu and Kashmir with almost no effort, and it wants Pakistan for its CPEC (economic corridor) to open a gateway to Arabian Sea/Indian ocean. Without PoK, China has no direct border with Pakistan, so it is vital from China's expansionist agenda to support Pakistan at any cost, even when Pakistan sponsors terrorism on large scale against India and other countries. China also keeps offering 'mediation' which India rejects every time within minutes.

Hope this gives a glimpse of the core issue. Frankly, the issue is not as bad as you see in the media. More than 12 million people live on the Indian side of J&K today. More than 10 million of those live peacefully. "Kashmir Problem" is essentially a problem in a small part within Kashmir valley, of a huge Jammu and Kashmir state. 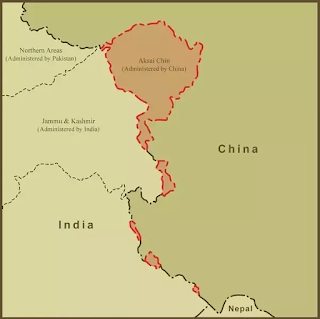 If you look closely, Aksai Chin has borders with both Xinjiang and Tibet. Both were not with China 70 years ago. Chinese call the 1949 occupation of Xinjiang (a Turkish Muslim dominated province) as the “Peaceful liberation of Xinjiang”. Before that in 1878, Chinese had “reconquered Xinjiang” once. Not sure why they needed a second “liberation” in 1949. They also term the 1951 occupation of Tibet by China as “Incorporation of Tibet into the People's Republic of China”. In short, both are huge central Asian regions and both were not a part of what we know as China today, before 1949. 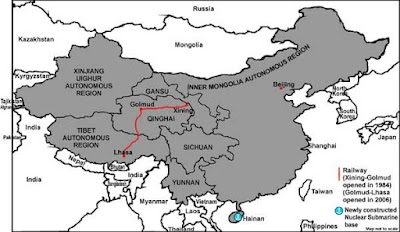 Then how did India lose Aksai Chin to China?

Because post 1947 independence, India was going through a big turmoil. Civil war, massive poverty and other issues had kept the first Prime Minister Jawaharlal Nehru busy with highly populated places, taking focus off Aksai Chin which had almost no population. It was a barren land in the high altitude of Himalayas, at the tip of Northern India. Moreover, Tibet was a buffer state between India and China, and a friendly one. So India had nothing to worry on Aksai Chin area. But the newly resurgent China had just “incorporated” massive provinces of Xinjiang and Tibet, and was building China National Highway 219. That highway runs through Aksai Chin connecting Lazi and Xinjiang in the Tibet Autonomous Region. Despite this region being nearly uninhabitable and having no resources, it remains strategically important for China as it connects Tibet and Xinjiang. The highway construction started in 1951 and the road was completed in 1957. This was one of India’s biggest blunders, as they did not “notice” this highway built through Aksai Chin, fully claimed by it! By the time they lodged complaints with China, it was too late.

So China literally got 10s of 1000s of sq. KM of Aksai Chin area, while India was sleeping or busy with internal issues. Now they are using it as a bargain to get more strategic lands east of Himalayas.
There is also another part of Jammu and Kashmir state of India, called Shaksgam valley. That is not barren like Aksai Chin. It is a beautiful lush green Himalayan mountain region, “gifted” by Pakistan in 1963 to China for other “favours” extended by China. It is CoJK - 2 (China Occupied Jammu and Kashmir part 2) in Jammu and Kashmir. 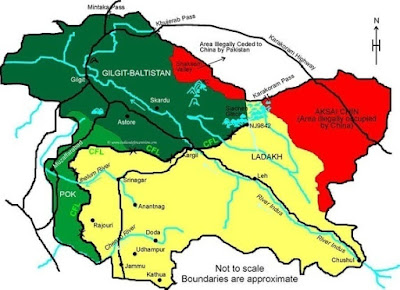 Shaksgam Valley must be the only land on this planet, which belongs to one country (India) legally, but “gifted” by a second country (Pakistan) to a third country (China) for other favours received!
So Aksai Chin and Shaksgam Valley issues would remain a thorn between India and China relations for decades to come.. if not longer.

Lastly, not only Aksai Chin, but China technically has no business with Himalayas. Even today, 94% of Chinese live east of the Heihe-Tengchong line or Hu Huanyong line. Yes 94%!! 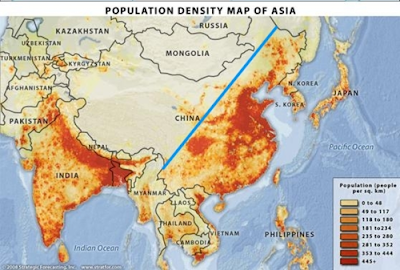 Sorry: J&K map is not accurate in this population density map found on the net.

Look on the Indian side. There are 100s of millions of Indians living within 100–200 KM from Himalayas all across its west to East length. So all these claims of Tibet, Aksai Chin, Shaksgam valley, Arunachal Pradesh, Xinjiang are fairly strategic and new from Chinese point of view, without any basis from historic or population existence logic. The Hun Chinese have historically been limited to the east of Hu Huanyong line. And it holds true even today.

Only one country has the legal instrument of accession signed - that is India.

The Instrument of Accession is a legal document executed by Maharaja Hari Singh, ruler of the princely state of Jammu and Kashmir, on 26 October 1947. By executing this document under the provisions of the Indian Independence Act 1947, Maharaja Hari Singh agreed to accede to the Dominion of India. 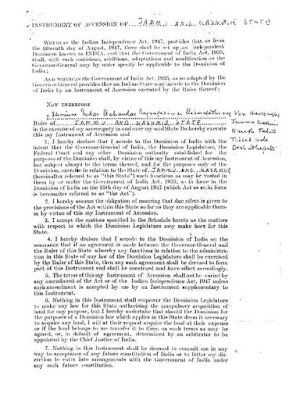 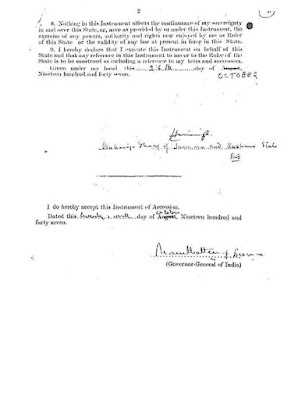 Just like modern India was formed by 500+ such accession documents signed by erstwhile Rajas, Nawabs, and other leaders, Jammu and Kashmir joined India in 1947. Once a part of Indian union each state has freedom within its territories, as defined by the constitution of India. Compared to rest of Indian states, J&K has a lot more freedom and autonomy. More than 200 constitutional amendments to Indian constitution are not even applicable in J&K as of today. 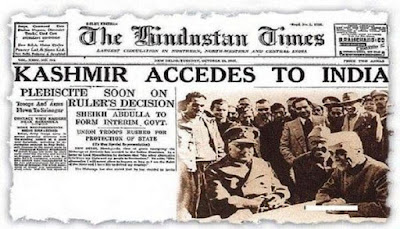 So no matter how many decades this talk goes on, No Pakistani or No Chinese can ever claim an inch of Jammu and Kashmir state, as the entire state is a legal part of India due to the accession document.

China is illegally occupying Shaksgam valley (COK 1) and Aksai Chin (COK 2). See map at the top of this blog post for details.

So Kashmir is already with Kashmiris. There are Kashmiri Chief Ministers governing the state for decades. Just like a Kannadiga governs Karnataka, a Odia governs Odisha, a Kashmiri is governing now.

Whatever violence and trouble we have there is sponsored by Pakistan which is illegally occupying a big portion of J&K. The moment China and Pakistan vacate their illegal occupations, and return the entire J&K to the rightful owner India, all problems would be solved immediately.

PS: All images used in this blog post are found using public search on internet. All credits to original rights holders.