Kannada and Marathi: So Much In Common! 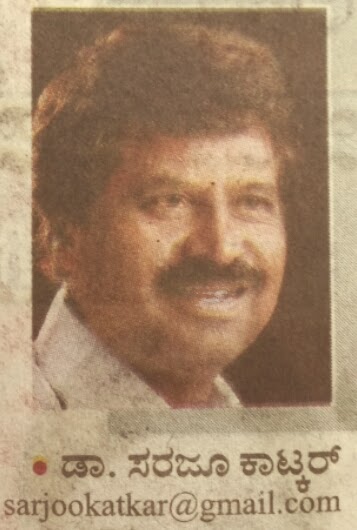 In the November 1st Rajyotsava special massive issue of Kannada Prabha (over 150 pages!), I spotted a fabulous essay by Dr. Karjoo Katkar. The title read: "The literary Ganga, that came crossing the border". Started reading, though I was in a hurry as I had only 5 minutes. But it was so interesting, that I ended up reading fully.

Then decided, I must blog the highlights from Dr. Katkar's research. His email ID is in the picture attached. So here I go.. The main purpose is to inform the people of today's Karnataka and Maharashtra, how overlapping their history has been over the past 1500+ years! This is possibly one of the closest sister language cultural evolution in India.

Origin of Kannada and Karnataka:
The word Kannada was also used as "Desha suchaka" or geographical historically, in addition to a linguistic denotation. In 850 CE, Kaviraja Marga literary work had this in Halegannda (old Kannada):

Basically the Rashtrakuta Emperor Nripatunga Amoghavarsha is telling here that "Kannada Nadu" extended from Kaveri till Godavari in the 9th century CE. 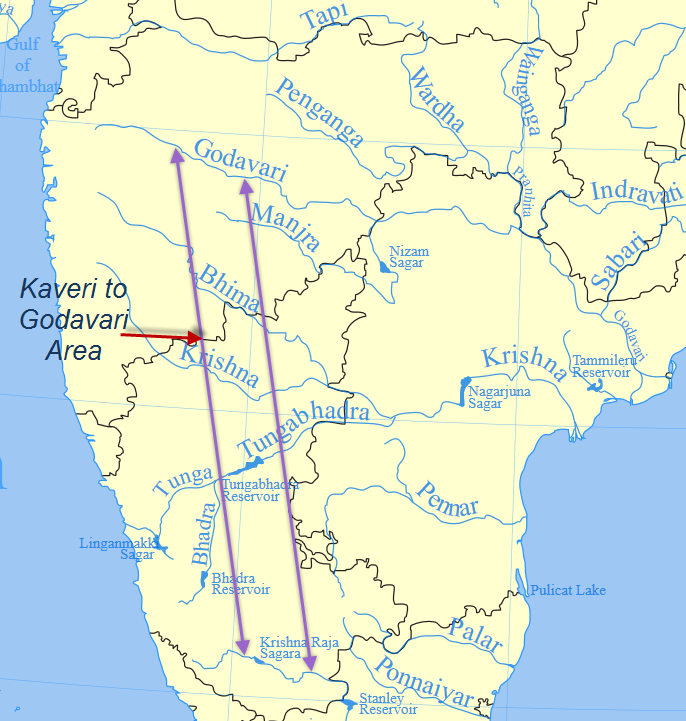 First occurrence "Karnataka":
Dr. Ketkar shows that in Mahabharata, in the Sabha Parva and Bhishma Parva, the word Karnataka is found. Among Hindu Puranas from 1000s of years ago, Skanda Purana, Vishnu Purana and Padma Purana have the mentions of "Karnataka". In the Sanskrit mega drama Mriccha katika of Shudraka from around 400 CE, there is a sentence "Karnataka kalaha prayogam karomi".  In the Tamil epic Silappatikaram, which is believed to be from 600 CE, "Karunaadar" is used to refer to the people of Karnataka.

Origin of Marathi and Maharashtra:
In Vararuchi's (most likely Katyayana from 3rd century BC) vyakarana (grammar) texts, the word "Maharashtra" is found. Even though the rashtra or nation/state that we know today didn't exist then, it is said that the term was with respect. Per scholars, "Shesham Maharashreevat" and "Maharashtree" were found in some ancient kavyas (prose), denoting the current location of Maharashtra. Some say the same became "Marahatta" and later "Marahti". Per Saroji Babar, the 6th century Pali literary work "Mahavamshi" (most likely this link from Sri Lanka)  refers to Maharashtra as "Maha ratta".

The 13th century Mahanubhava book has "Maharashtra" word. Per Dr. Bhandarkar, "Varhada" or "Varhata" people later became Marathi people. Per Dr. Ketkar's "Marashtra Sanskriticha Itihas", Varhata was the original Maharashtra. The Varhata people migrated from their original place (which I don't know from where), to Krishna Godavari area, culminating in Maharashtra. In the 1190 CE's "LeeLa Charitra", there is a mention of "saari laksha Maharashtra tehi vasavile Ganga teero Triambako vheri". In the 10th century's Dhanapala's "Bhavisya yatta kaha" work, "Verada" word is there which the author suspects as the original word of "Marhada".


The oldest Marathi inscription is actually found in south Karnataka:

The oldest Marathi shila shasana (stone or other inscriptions) was incidentally found in Karnataka's Shravana beLagoLa, very famous for the world's largest monolithic stone statue of Jain Gomateshwara or Bahunbali. Shravana beLagoLa is having more than 2000 years of Jain dharma's history and is one of the world's most holy places for Jains.

At the feet of Bahubali's statue there's an inscription "Shri Chavundaraje karaveeyale" and "Gangaraje suttale karaveeyale". These are believed to be the earliest Marathi inscriptions ever found. Chavundaraya's age is somewhere in the 9th century CE. So Marathi might have existed by then.

Marathi in ancient and medieval Kannada literature:
In the first major poet of Kannada, Adi Kavi Pampa's "Adi Purana" from 941 CE, there is a mention of Maharashtra. In his other work "Bharata", he uses "are hoi" from Drona's mouth praising Arjuna. In another Kannada writer Mahakavi Janna's "Anantantha Purana", there is "Uthi Uthi maagaa baisa jaa tu haLoo" (get up, get up, slowly go and sit in the back) Marathi sentence!

Then Vachana sahitya (literary work) period of the 12th century in Kannada, which flourished into the Lingayat or Veerashaiva movement resulting in the largest single group of people in Karnataka today, also has plenty of Marathi words. For instance, the famous vachana composer Allama Prabhu's one vachana has this. 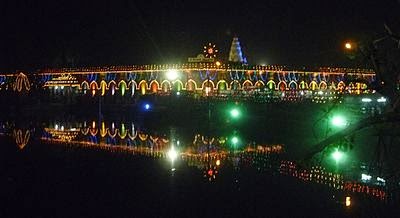 Similarly Sonnalagi Siddarama's or Sonnalagi Siddheshwar's vachanas have Marathi words. Even though he's a Kannadiga, he is worshiped as the "Grama devata" or village deity of Solapur in today's Maharashtra by Marathi people too. There's even a beautiful Siddheshwargad for this saint and poet.

Even Basavanna the founder of Lingayat philosophy and Channa Basavanna's vachanas have a few Marathi words. 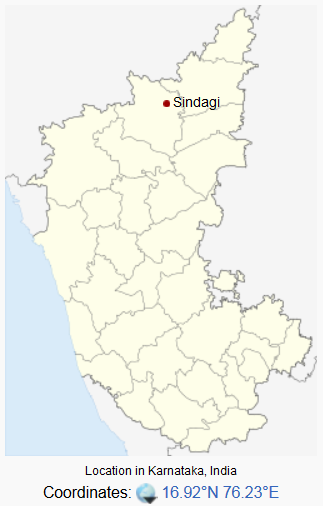 His "Khanda kavya" is found both Kannada and Marathi.

The above is a story about Vibheeshana in Ramayana by Jakkappaiah, in the same verse of the same chapter, in both Marathi and Kannada! Such examples are very rare to find today. And it keeps happening the same way throughout his Khanda Kavya work.


Kannada in ancient and medieval Marathi literature:
Maharashtra's Varakari panth and Karnataka's Dasa panthas were of the same era. Both thrive in Krishna or Vitthala bhakti (devotion). Marathi saints have openly announced that the Pandharapur's Vitthala or Vitthoba is of Kannada origin.

The great Marathi sant, Jnaneshwar or Dnyaneshwar sang this: 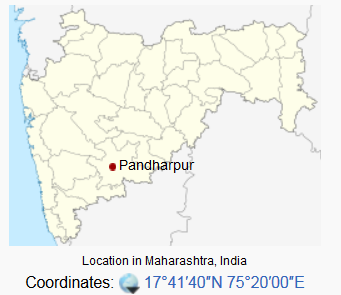 Meaning, Vitthala came to Pandharapur from Karnataka. Per Dr.Katkar, scholars have identified many Kannada words in Jnaneshwar's famous commentary on Bhagavad Gita, Dnyaneshwari. The famous researcher Sham Ba Joshi even went to the extent of saying "If one has to fully understand Dnyaneshwari, he or she must know Kannada well". The father of South Indian Carnatic classical music, Purandara Dasa, has translated some songs of Dnyaneshwar from Marathi into Kannada.


One of Dnyaneshwar's abhanga is fully in Kannada.

The great Vachana writers in Kannada used words like Shunya, Linga, Lingabheda, Gurulinga, Shunyalinga, Aradhyalinga kind of words. Dnyanehwar has used those repeatedly in his works in Marathi.

Vithaabai was another Marathi saint. Her Abhangs too have mention of Karnataka. Sant Eknath respected Kannada with this sentence "Navo KaanaDi bhashaa". His works have many Kannada words. Marathi bhakti poet/saint Eknath and Kannada bhakti poet/saint Kanakadasa were of the same era. Eknath's bhaaruDas and Kanakadasa's manDiges have lot of overlapping inspirations.

Marathi literature has a special place for Mukteshwar. He was the grandson of Sant Eknath. Mukteshwar's father Balakrishna used to live in today's Karnataka's Gadag district's Dhambala. There's a temple on the banks of Tungabhadra's Chowdadanapura for this Mukteshwar. Per SB Joshi, Mukteshwar who translated Mahabharata into Marathi, was greatly influenced by the famous Kannada author Kumara Vyasa or Narayanappa from Gadag, who lived a few decades before Mukteshwar.

Here is what Mukteshwar accepts the inspiration from Kumara Vyasa's Gadugina Bharata:


And as we all know, Sant Ramdas has a special place in Marathi history. He exclaimed like this:
"Chitrakala naana naTaka maNani naam Karnataka" meaning Karnataka is named as that because of plenty for drawing and dramas (nataka).

Gurla Hosur's avadhuta Chidambara Dikshit's biography is there in Marathi. His shishya Rajarama wrote his Abhangas in Marathi. But his samadhi is in Belagavi district's Govaves area. 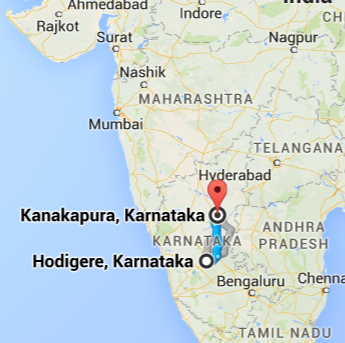 Shivaji's father Shahaji Maharaj was the Governor of Bengaluru area under Adil Shahi patronage. He was in charge of Doddaballapur, Tumakur, Kunigal, Chikkanayanaka Halli and Ramagiridurga areas. B Muddachari has detailed the life of Shahaji in Bengaluru area in his book "Mysore-Maratha Bandhavya".


Shahaji died in Karnataka. His samadhi is at a village called Hodigere in Davanagere district.

Shivaji's elder brother Sambhaji Bosale had fought wars in Karnataka. He too died in Karnataka and has a samadhi in a village called Kanakapura in Koppala district.

So the two close relatives of Shivaji, his father and brother, have samadhis in central Karnataka.

When the Moghals chased Shivaji's son Rajaram Chhatrapati, he was sheltered by Rani Keladi Chennamma in Karnataka (different from Kittur Chennamma). When Belawadi Mallamma fought a war against Marathas using an all woman army, he saw his mother Jija Bai's image in her. He respected her and sent her back.

Overall, Shivaji's family and their ties to Karnataka are intense.

Let me attach the full page article in Kannada from Dr. Katkar, in two parts here, for those who want to download/zoom and read. 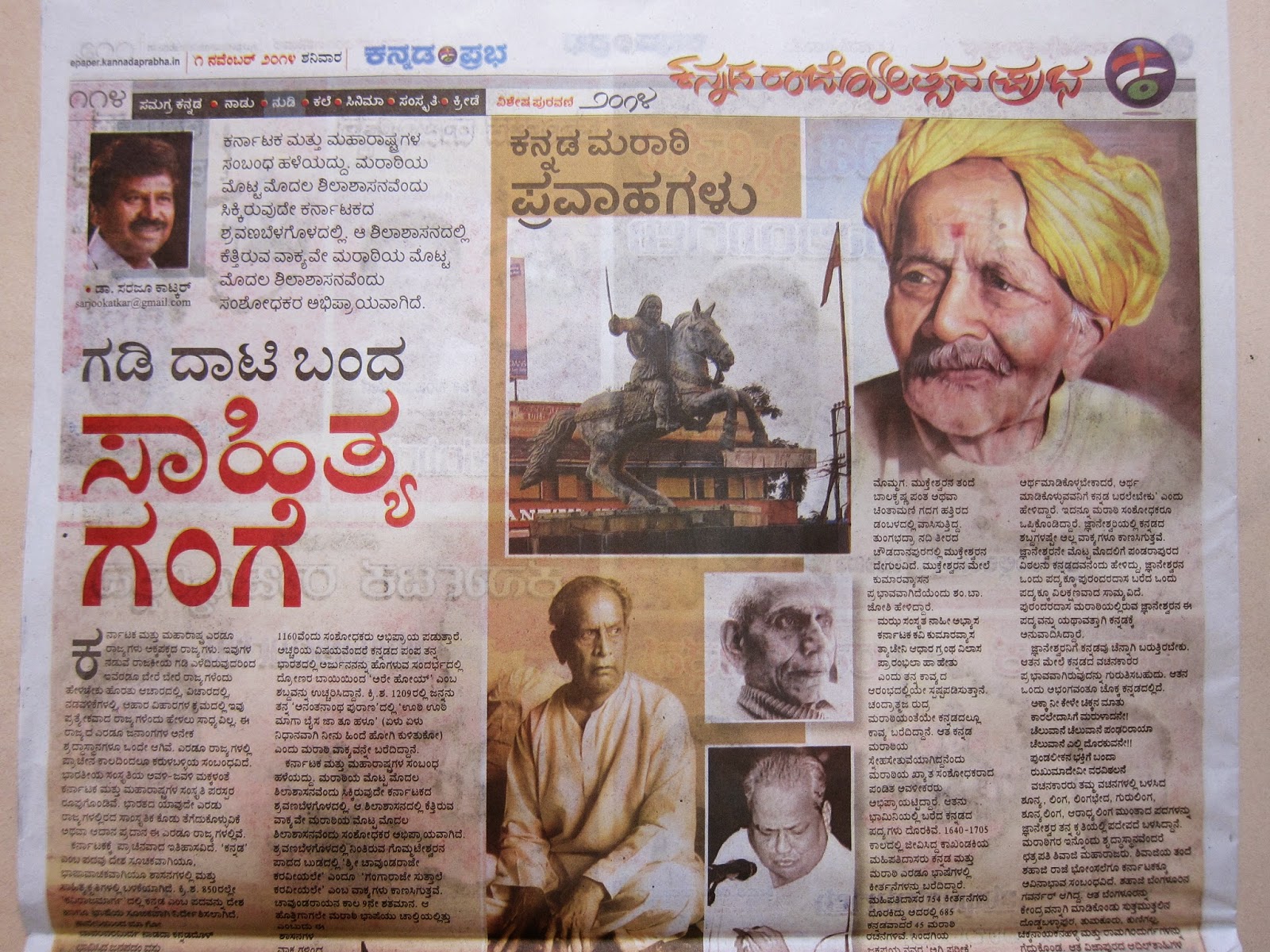 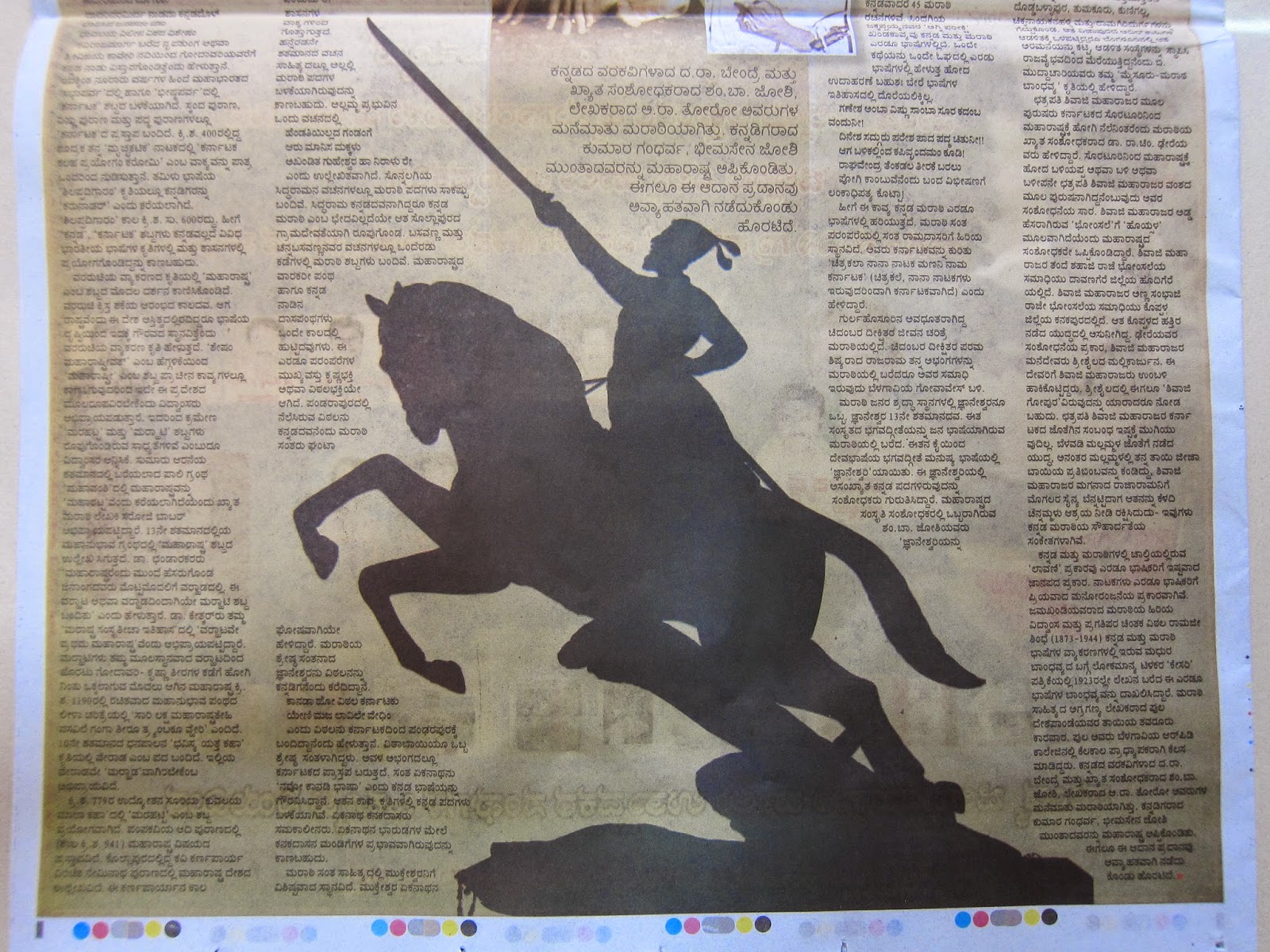 My thanks to Dr. Sarjoo Katkar for giving us lots of information to know how close the Marathi and Kannada cultures and civilizations have been :)

Picture credits: Wiki and Kannada Prabha
Posted by Kiran KS at 2:07 AM 5 comments