Here's what happened in India.

Pre 2013:
Congress was winning elections due to ill-informed middle-class and mostly freebie enjoying rural population. In 1994, India's middle class population was just 2.5 crores. Now it is 10 times that. And one thing I observed is that middle class has more or less moved away from Congress. I don't have a single sane friend in my close circle, who vehemently supports Sonia Gandhi's party.

Since most political parties have their own designated votebanks (DMK, ADMK, BSP, SP, RJD etc.), by default middle class, that too in tier 1, 2 and 3 cities were supporting BJP in large numbers. But many were disillusioned with BJP too as those who were imported for quick power, did not stand up the scrutiny in many cases. And BJP is always disliked by those who have lesser connection to true Hindu roots. No matter what, for them BJP is dangerous.

This vacuum was exploited by Kejriwal. He could fool a few middle class disgruntled youth, who were encouraged by revolutions in the middle East, Occupy Wall Street and many other contemporary movements. They saw a messiah in him, even after he blatantly used Anna Hazare, Baba Ramdev and many more to only dump them to achieve his goal to grab power. And the hype continued 24*7 on TV. 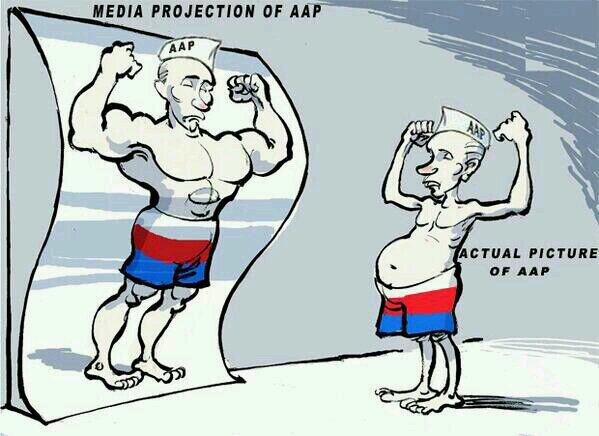 The small success in Dilli was portrayed by media as a great achievement. In reality, AAP had only 0.68% of MLA seats in India. In most countries such parties are not given the space they got in India. Why they got so much space?

2 reasons:
1) They had close media links as it was exposed in "bahut hi krantikaari" video -> http://www.youtube.com/watch?v=3hj6ScbJ3sY

2) Some middle class folks saw their potential to challenge BJP and Congress as a third front.

In Dilli, the situation is worse now. They have no government after Kejri ran out giving excuses and hence earned BhagodaKejri title.
The rapes, the crime, the water mafia, and everything is rampant.
Worse, the much publicized electricity "subsidy" drama has been exposed too. Kejri never left any money to pay for the subsidy.

So in essence AAP and Kejriwal defaulted on ALL his promises to Dilli voters. The long list of u-turns and lies earned the title Kejri-Turn.
If an election is held in Dilli today, a vast majority of those who funded AAP just 4 months back may be reluctant to repeat the funding.

After running away after 49 days:

The 3 cities that had donated most to AAP, seeing hope in them were Dilli, Mumbai and Bengaluru.

Dilli was an utter flop episode. In fact, Sheila's government at least provided some governance and did not run away like Bhagoda Kejri.

In Mumbai the second most contributing city to AAP, he tried to test waters, but the show was bad. It resulted in AAP Chaos and people cursed the drama company.

Then the drama queen went down south to test waters in Bengaluru, the third highest contributing city to AAP.

It was so bad that the next morning's paper had flAAP show as the headline. The road show was cut short miles before the planned finish. Dinner saw only 175 and next day's rally was nowhere near the enthusiasm shown to Anna Hazare's rallies 2 years back at Freedom park. The local people almost fully dumped Kejri and gang with only some North Indian migrants still sticking to sloganeering. 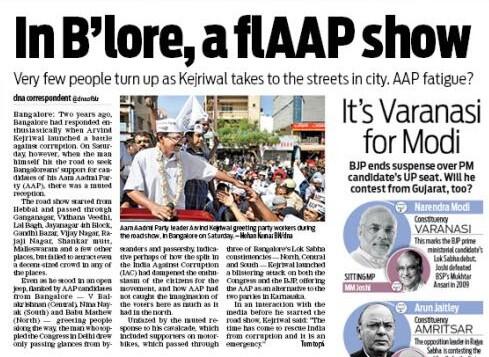 So now what?
Modi wave is clearly predicting an NDA government now. The third, fourth, republic and AAP fronts are all collapsing. Congress is staring at 100 or so seats only. So what's now for Kejri whose political existence is at stake?

The one and only option. Go anti Modi in full force. At least that way he would be in news for 2 more months.

So the 2014 election battle is back to the familiar BJP versus "secularism". This time even within BJP, Modi has overshadowed everyone, sending them to non-striker end.

Another way to showin the same desperate effort of all anti BJP forces trying to dislodge Modi's tsunami, keeping Kejri was a poster boy. 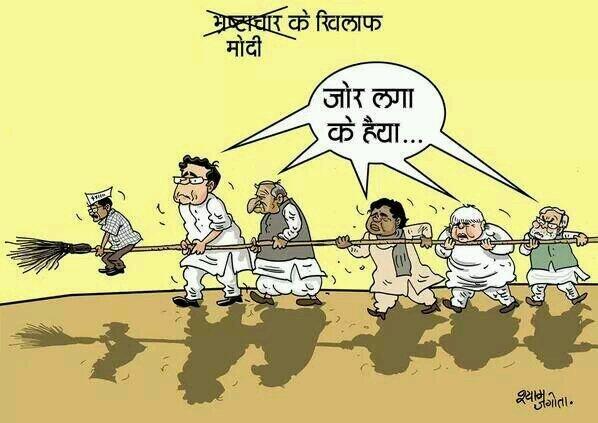 That my friends, is a summary of the rise and fall of anti-corruption movement in India. Now we are back to election time secularism and communalism debate, but the only change this time is... Modi has turned communalism debate in most cases into Development debate. Even Mulayam Singh Yadav and Arvind Kejriwal, with zero development track record, have been forced to talk of development (or talk negatively about Gujarat where development is clearly visible to the local people).

1) He has emerged as the clear winner within BJP camp. It took him lot of effort.
2) He has forced casteists, communals and even anarchists to talk of development topic. In fact, Modi's clear emergence as leader has already secured NDA 20+ allies before the election itself! That's comparable to Vajpayee's ally strength at the peak of NDA :)

Now the third and the last step in his 2014 battle would be to demolish the pretentious anti-corruption squad and their sponsoring corrupt Congress team by big margin. Let's hope he does!

{Credit to pictures - social media}
Posted by Unknown at 12:32 AM 1 comments