Are there any solutions to the terrible Bengaluru traffic?

I saw this question on Quora sometime back.
Will Bangalore’s traffic problem ever be resolved?

Plenty of good minds analyzed the issues and provided some answers. Since I am born and brought up in this city, and have been driving here since late 1980s, I thought I can pitch in to some extent.

So reproducing my answer here.

Firstly, you should know the scale of Bengaluru traffic growth:

Today, Bengaluru has close to 68,00,000 vehicles, which is the second highest in India after Dilli metro area. But here is a big difference. Dilli (NCR) has a huge metro train network (213 KM, 160 stations) almost completely sponsored by the central government (pool of all states’ money). It also has a much bigger and wider road network built using central money over the decades. There are still massive jams in Dilli, but that is another discussion.

Coming to Bengaluru? Why are Bengaluru’s roads so heavily jammed all the time?

1) The primary reason is that India has this awful 4 metro city policy for decades. That means, only Dilli, Mumbai, Kolkata and Chennai were metro cities and they qualified for various metro city related infrastructure and other benefits. The other cities which grew up at equally or much faster rate, like Bengaluru, Hyderabad, Pune, Amdavad etc. did not qualify for the metro city tag, and hence central assistance. That to some extent seriously hampered the infrastructure in these second list cities. If the central governments had provided even a basic suburban train system covering the key areas of Bengaluru by 1990 or even 2000, things would have been a lot different today. You have nothing to travel from Banashankari to Yalahanka directly. You have nothing to travel from Indiranagar to Vijayanagar directly (other than newly opened Metro). You have to go on the road, or depend upon the new Metro which is progressing at 5 to 10 KM pace per year, making it utterly useless to reduce traffic.

2) The second reason is geography. Unlike Mumbai, Chennai or other coastal cities, Bengaluru (and Hyderabad etc.) can grow 360 degrees. There is no river or sea or mountain stopping the city from growing in all directions. So as of 2011 figures (Business Standard), Bengaluru urban district grew at an unimaginable level of 46.68% between 2001 and 2011. That’s because the city can grow 360′ and it literally grew on all sides. With more people coming in from all corners of India, there is no way infrastructure can keep up. No city in the world can handle a 46.68% decadal population growth with timely infrastructure. With the heavy corruption in Bengaluru’s civic authorities, it makes it even more susceptible for lagging behind. The numbers below are not exactly metro area population, but urban district as defined by the authorities.

3) The third reason: It is the massive IT industry which is exporting well over Rs.2,25,000,00,00,000 each year, is located mostly in the east to south east corridor. And that is the area least well connected by any train system. None of the current Metro tracks even go near the Electronic city (south East) to ITPL (East) corridor. This primary IT corridor is well over 25 KM in length (Electronic city, Bommanahalli, Silk Board, Sarjapur Road, Marathahalli, Kundalahalli, ITPL, Whitefield). With more than 75% of the city’s population staying in south, west, center and north, a huge traffic jam gets created in any road that leads to IT corridor. Be it Silk board, or KR Puram bridge, or HAL road.. you take a road and you will see massive jams. It’s just volume. With India’s second highest number of vehicles on the roads, and with just 18,000 KM of roads for 1 crore population and over 4000 sq KM area, you have a perfect recipe for jams. Even though Bengaluru has the best Volvo AC bus system in India (Dilli coming close enough), the narrow roads won’t let any bus cover the distance in reasonable time. 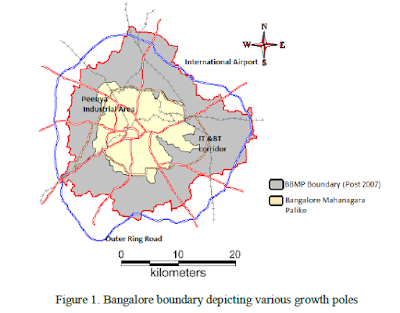 4) The fourth reason is that Bengaluru is the only city other than Dilli, which has both North South Corridor and Golden Quadrilateral highway systems passing through the city. Since Mumbai and Chennai road is one of the heaviest traffic in India today, it was passing straight through the city causing immeasurable jams. Now NICE road is to some extent relieving that via bypass. But the Hyderabad to Kanyakumari north south traffic has no way but to go through the city, causing heavy jams even in night times. Same thing with Mysuru to Tirupati west to east traffic. No place to go other than city. So lakhs of interstate transport and tour vehicles get caught up in the jams, when ideally they should have been bypassing the city at 30 KM outside the city. 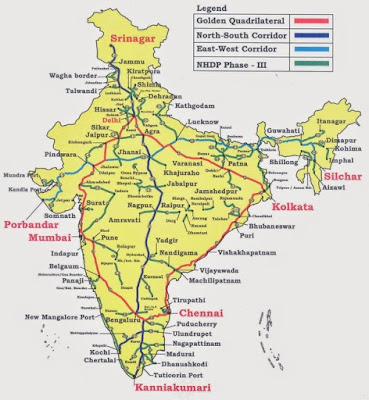 So those are the four biggest reasons for traffic jams.

Action 1: Central governments neglected the infrastructure needs of Bengaluru forever. Now it is too late, but at least they can do some national highway periphery roads, rapid trains, elevated trains or at least 25% of the money they give to Dilli Metro, to Namma Metro. Remember, Dilli metro got Rs.5579 crore in 2016 budget, probably more than all other cities’ metro projects in India. Central government should start treating other cities also a bit better now, and give a few 1000 crores to Bengaluru metro (and Hyd, Pune, Jaipur etc.) each year to help with infrastructure. Nothing in the world can replace trains in terms of mass transportation. Bengaluru Metro, elevated trains and suburban trains should be the focus crisscrossing the city, creating at least 200 stations by 2025. That’s the BEST solution, else we are doomed. You can’t just create enough roads or fly overs. They won’t solve the traffic issue. You will see more than 1 crore vehicles in Bengaluru by 2025. Since the central government gets 10s of 1000s of crores in tax revenue from Bengaluru each year, it should give back a big portion to create world class train infrastructure of at least 500 KM. Right now Metro is just around 40KM and won’t help in any traffic reduction. The state just does not have enough revenue to invest 10s of 1000s of crores in building new train infrastructure. The center should also invest in giving bypass on the eastern side for North South National Highway that has no where to go today other than the city. A 6 or 8 lane peripheral national highway on the eastern side of the city, bypassing the current road systems will take away a lot of big vehicle pressure from roads. In short, the city needs massive amount of trains, and a full 360 degree bypass roads for interstate traffic. Right now it has only about 120 degree real bypass (NICE, that too super expensive toll) available.

Action 2: The state should work on satellite cities or small clusters using SMART or AMRUT city projects around Bengaluru. This is particularly needed in the Hosakote to Sarjapur regions. Unless you make people travel to IT corridor from east, rather than west, things won’t improve.

Action 3: The state government should work on moving industries to the North West, South West or North. Western Bengaluru is heavily populated (Basaweshwara Nagar, Rajaji Nagar, VijayaNagar, Mahalakshmi Layout, Peenya), but the jobs are mostly in the south east and far east. So by bringing in industries to the west (Magadi road), north west (Tumkur road) or south west (Mysuru road), a lot of traffic problems can be solved. It takes 2 hours to travel from Basaveshwara Nagar to Whitefield today. If the industry was near Peenya, it would be 30 minutes! Another area to focus heavily is the northern side near the Devanahalli area. If more people move north (water is a big issue there), things might get a bit easy for south east.

Unless a serious coordinated effort is done in these 3 areas, we are going nowhere other than making jokes about Silk Board and KR Puram bridge jams..

The latest was from near Silk Board..
Driver to a neighbour: “Sir, why are you walking home? Shall I give you a drop?”.
Walker: “I would have loved to come with you, but I am in a hurry to reach home before my children come at 7 PM. So I am walking” :)