Why is Congress losing its ground in India?

There was a question on Quora:

Why is Congress losing its ground in India?
A cursory look at the political map of India reveals that the Congress rules some patches at the margins with only Karnataka, Punjab and Himachal Pradesh left as the proper in-land states.. 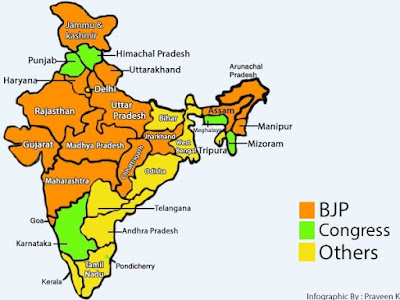 I tried to answer with March 2017 current assessment of Indian politics. See if you agree with me.

Congress is losing during the 2010s mainly because of the following:

1) An ailing President, who does not give up the top post.
Sonia Gandhi has been the President of Congress for nearly 20 years now. By far that is the longest stint in Congress party’s history, even if you go back to pre independence era. No one held for so long the top post. Congress talks of Muslims, Dalits, Poor etc., but never thought of giving the much coveted top post to any of them. 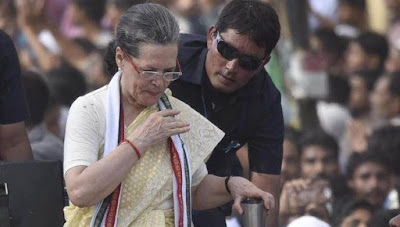 Sonia was doing well with well informed strategists for the first 10 years into her presidency. But then her health has started giving way. No one knows where she goes for medical treatment, what illnesses she has, who pays, how serious is her condition etc. Only half news and rumours float around. This is Congress party’s big weakness now. With a strong unbeatable Amit Shah- Narendra Modi combo sweeping India, an ailing and at times untraceable Congress President will weaken lot of plans and strategy. When Modi can do 100s of big rallies and road shows in a year, Congress can’t even match with 10 big rallies with Sonia as star campaigner. That is hurting.


2) A reluctant and incompetent Vice President
Rahul Gandhi is undoubtedly Congress party’s biggest weakness now. His track record is horrible, and in any corporate setup, such a Vice President would have been fired long ago. But as Congress party always runs around the Nehru-Gandhi family, he has to be kept in the center, with more capable mass leaders running around him like electrons around a Nehru-Gandhi nucleus!
Here is a famous joke about him floating on Twitter. It tells you everything in succinct terms. 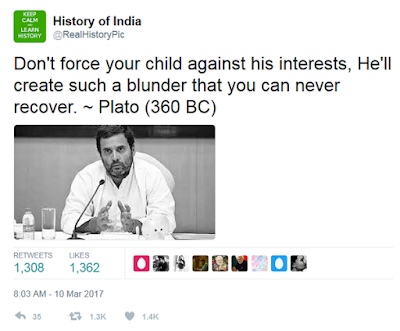 And, he also has the same problem as his mother. He disappears out of India for longer periods without anyone knowing what is happening. You can’t run a party successfully with millions of workers and supporters, if you have mother and son combo at the top, be unaccountable in most cases and untraceable on occasions.


And interestingly, wherever Congress is still existing, like Karnataka and Punjab, it is mainly because of capable local leaders like Siddaramaiah and Amarinder Singh. Not because of Sonia or Rahul. Amarinder might even have strategically kept Rahul out of Punjab campaigns recently.

3) Lack of vision that matches with the vision of 21st century India.
Ask any Congress loyalist. What are the top 5 schemes or projects for India today? They will repeat the same things that were there during Indira Gandhi’s time. But young India is demanding much more. Modi’s Jan Dhan Yojana, Digital India, Standup India, Skill India are the kind of things young India wants. Not the same old Garibi hatao slogans and obsolete NREGA kind of artificial employment generation schemes of Congress. The very reason Congress was reduced to just 7 seats in a 403 member assembly of UP recently, shows that people have totally dumped Congress. Even the most loyal vote banks of Congress has been distancing itself out.

4) Most of its core political strategy is taken away by BJP.
Congress had great years between 1950s and 1980s. Mainly it was due to social engineering across castes and religions, and pro poor socialistic freebies. But now BJP has worked out its own social engineering. That has made Congress vote bank disappear in most states. Secondly, India has moved on and freebies don’t win elections anymore. India needs real work like LPG cylinders in crores of rural homes, electrification of the remotest villages, 10s of crores of new bank accounts, demonetization that the poor perceive as hurting the black money hoarding rich.. Most of Congress’ agenda and vote bank has been snatched by clever moves of BJP. Also, Congress playing second fiddle to regional satraps like Lalu, Mulayam and Karunanidhi is hurting even more. But who has time to sit and discuss all these? See reasons 1 and 2 above to know the core reasons again.

5) Unable to shrug off the SCAM taint.
During this decade, Congress means 2G scam, Coal scam, CWG scam and a host of other scams. It even made to recent UP election as SCAM acronym, but unfortunately Rahul Gandhi did not even understand the severity of that. He tried to snub Modi by owning SCAM acronym which made Rahul a laughing stock. Results were there to see after a few weeks. Congress decimated again. Congress needs fresh faces. Because right from Sonia Gandhi and Rahul Gandhi, all the big faces are scam tainted now. Sonia and Rahul are out on bail in the National Herald corruption case. So anytime Congress opens the mouth on corruption of other parties, people will ask about Congress mega scams. That is hurting Congress at perception level.

6) Last and most importantly, unable to make head or tail of how to handle the Modi TsuNaMo sweeping India. 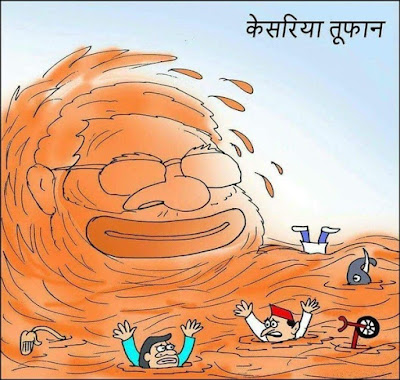 It is so serious now that for every one person living in a Congress ruled state, there are seven people living in a BJP ruled state. BJP has almost hit 2/3rd of India in terms of state governments. And they are nowhere near peak, as there is a lot of ground to still take over along the eastern coast of India. Narendra Modi’s clean image, hard working nature, and outstanding clarity in convincing a voter, is unmatched by the opposition. The only thing Congress and its allies are doing is to bad mouth Modi, which he is cleverly using to get even more votes!

So if Congress has to regain ground and relevance pan India, it has to:-

PS: All images from Google Pictures. All credits to the original photographer or owner of the picture, who placed it for public consumption.
Posted by Kiran KS at 2:50 AM