Flush Out Pessimism.. India is changing for good!

I still see a lot of pessimism about the new projects of Government of India.
I want to write in more detail here.

Wake up Indians and NRIs.. Lots of self made leaders have come up. Nirmala Sitharaman arm twisted even the powerful American lobby at WTO meet by demanding that trade facilitation has to be simultaneous with other demands of India. Even Sonia Gandhi's trusted big name Anand Sharma had compromised last time, which this first time minister has set right. Uma Bharti is on the ground trying to clean up Ganga which is a project as tough as climbing Mount Everest on one leg. The Jan Dhan Yojna is pushed by younger team so successfully, that over 7 crore new bank accounts are opened in India in just 2 months. This speed of financial inclusiveness has never happened in India's history! C'mon.. we are talking about 7,00,00,000+ bank accounts in 8 weeks, with automatic life insurance coverage and debit card, in a country where it takes 3 visits for even KYC document for existing bank account in a city bank! 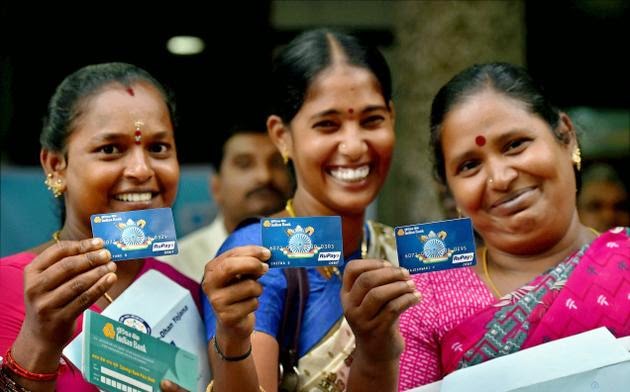 India's inflation is at 5 year low. Mumbai saw a more than 3 Rupees Diesel price cut for the first time in a long time (last time was 2 rupees cut in 2009 Jan!). Indian markets are euphoric and performing better than most world markets. Naxals are surrendering in record numbers. I read recently that there has been a 20 fold increase in maoist terrorists leaving the path of terrorism in the heart of India, and joining mainstream. I saw pictures of CRPF jawans actually carrying surrendered naxals over their shoulders, giving them a mainstream society welcome. The Nehruvian central planning commission which was the white elephant slowing Indian economy is being dismantled. IMF just issued a statement that India will be a $2 Trillion economy this year itself! And might overtake Italy, Brazil and Russian GDPs before Modi's first term ends..

Never before a 1 lakh crore fund for entrepreneurs was setup by the government. I attended a seminar on how young Indians can get into manufacturing entrepreneurship. I was shocked at the energy level.. They are talking about so many start up ideas, while 3 years back 60% was just about IT industry start ups. Smart City is another topic that every MP and MLA is trying to encash on for his or her popularity.

In 1999 when the cyclone hit Odisha, 10,000 Indians died within 48 hours. The land fall speed of that cyclone was nearly 250KM ph.
Just last week, Hudhud cyclone hit not far from there, at Visakhapatnam, AP. The preparation and coordination of both AP state govt and central govt was so good, that in spite of 175+ KM land fall of the cyclone, only 24 people died within the first 48 hours. Yes 24 is also bad, but look at the progress ISRO, meteorological scientists and overall disaster relief of India has come through in the past 15 years. From 10,000 deaths to 0.24% of that 15 years later, is no mean achievement. I don't care if NDA1, UPA1, UPA2 or NDA2 takes credit. But all I say is that, there is no need to feel pessimistic about India any more. 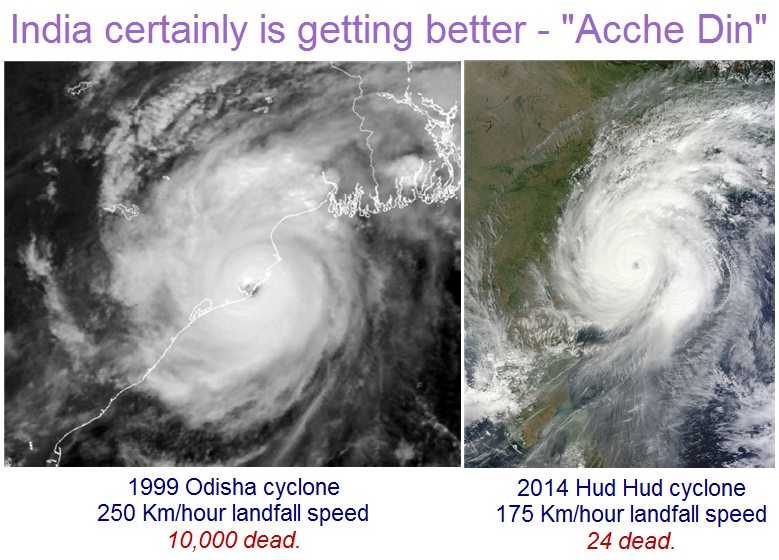 In 2003, when Vajpayee announced Chandrayaan and pushed the scientists, it was of tall order. Not only India has exceeded Chandrayaan expectation since then, it also created all sorts of records in Mangalyaan cost. You would have heard about the euphoria at Madison Square Garden on this.. The heart burn was so big that NY Times even resorted to a racist cartoon which it had to later pull out with apology. In European papers, jasmine flower clad Indian women in saree were prominently displayed as the new face of space scientists! This particular Modi style "dono mutthi band karke" pose was in dozens of country's news papers, bringing India a new recognition. 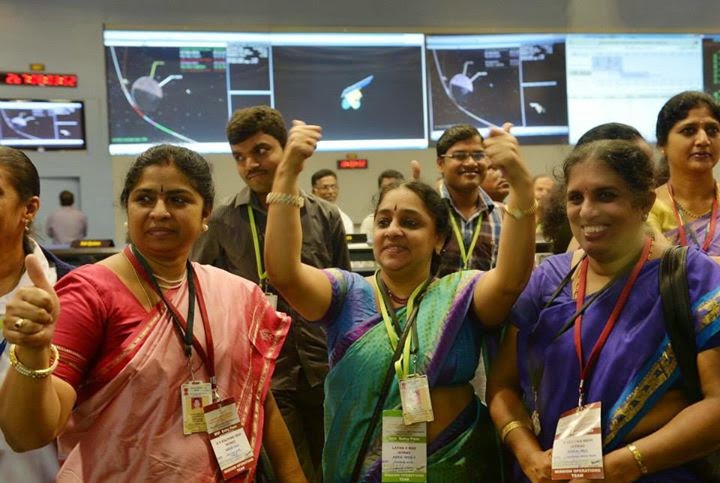 And regarding working hours - talk to anyone visiting government offices in Dilli. Officers are there on time. Even ministers are considering it as a punishment to work under Modi now as they have to be in office till late night. All the 4 PM booking for happy hours at trendy establishments are slowing from babus. And every project, and every detail is instantly put online so transparency is at it's best level that I have seen.

Regarding the pet project of Modi, the Swacch Bharat (Clean India), I am getting 3 to 5 Swacch Bharat pictures from youngsters across India who have taken it as a challenge to clean up India. I have seen 100s of people who come from a foreign visit to India, and they start about bad mouthing the Indian "filth". Modi is the first man I have seen, who actually came back from a foreign trip, and the very next morning, had a broom in his hand cleaning up a police station's compound!!

I was so happy to see 16 and 17 year old students from a Bengaluru PU college, cleaning up a 500 year old temple pond in straight 7 hours, with no specialized tools or help. Modi's mantra of swacch Bharat has caught the imagination of India and things are going really well. 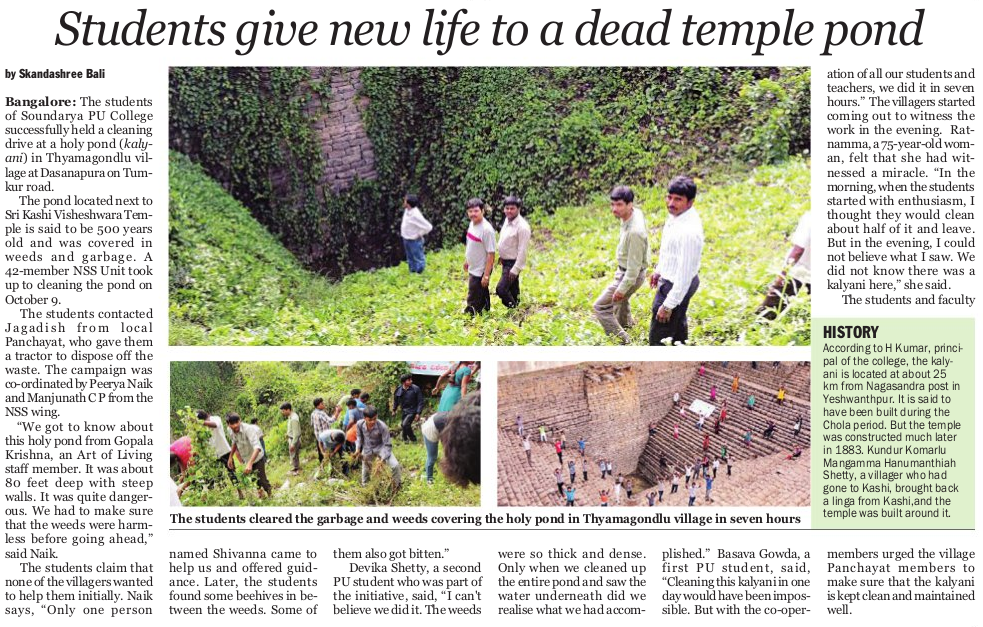 Here's another example from Rajahmundry, AP. 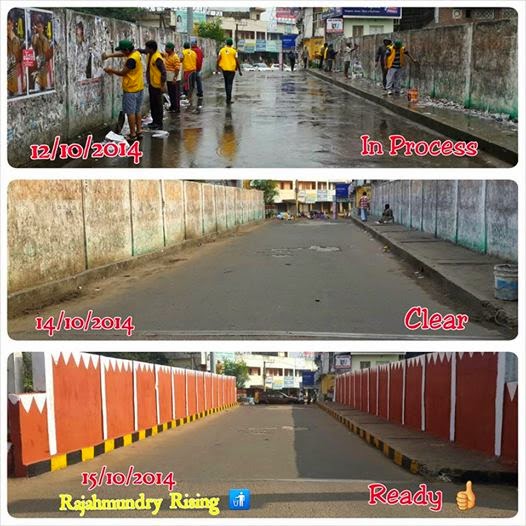 India is changing from bottom up as well as top down. And it's being led in most cases by young India - those in 15 to 35 age group. Their energy is mind blowing!

I heard in a recent seminar a very cautious words: India's greatest asset between 2015 and 2050 is its demographic dividend. If this is not managed well, or if anarchists and anti-India violent guys are allowed to brain wash them, it will turn into a demographic disaster. The choice is yours. Particularly the well informed, globe-trotting, rich Indians should be in the fore front of guiding young India to realize it's potential and reclaim the 25% share of world GDP that India had for 1700 out of the past 2000 years.

Flush out pessimism, irrespective of your political ideology. We are at the beginning of a very long and steep climb into prominence!

Picture credit: Hindu, NIE and Social media
Posted by Kiran KS at 1:30 AM