Saffron or Hindu Terror: Does it Exist?

This blog is to examine if 'Saffron' or 'Hindu' terror as hitting headlines off late, exists or not. Without giving lengthy disclaimers, it would suffice to state that I am presenting my understanding based on a fairly wide ranging angles, but you are free to make up your mind, as always. But do use, some nice, thought provoking details, provided in this blog to expand your thought process in this emotional, as well as sensitive topic.

What is Terrorism?
Let's start with a cliche.. "One man's terrorist is another man's freedom fighter". Yes, that's true. In fact, not just freedom fighter, but warrior, activist, political hero, religious martyr to mention a few other denominations.

Why am I writing this blog? Because of P Chidambaram, the Home Minister of India, for his utterly nonsensical utterance, "The Saffron Terrorism". For those who don't know, Saffron is associated strongly with Hindu religion (among a few other religions) and strongly held as the identity of right of center political lleaning groups (like RSS) or parties in India. Obviously, Chidambaram's party, the Indian National Congress, as well as their sympathising media have blown this out of proportion. Some are convinced that 'Hindu' terror absolutely exist, while some vehemently oppose this as a delusion of some anti-Hindu sections of Congress or  other seemingly pseudo secular (as termed in political discussions) political parties. Let's get to the bottom of the topic via a slightly lengthy, but informative & factual route.

Merriam-Webster dictionary, one of the most widely used, defines Terrorism as "the systematic use of terror especially as a means of coercion". Obviously as of this date, there is no universally accepted definition of terrorism that exists. So we are literally in an age where we can call anyone & everyone as a 'terrorist'. Hence, it becomes even more important to get to the bottom of who we can most likely call a terrorist. In my view, terrorism is best described in 21st century context as: "Indiscriminate or targeted killing of mostly civilian population, for social, political, ethnic, religious or ideological, or a mix of these reasons, by non-governmental agencies". Obviously, the term 'non-governmental' and 'civilian' needs a debate by itself, which I will skip for now.

Let's focus on the definition made above and see some examples. In most cases, terrorists don't have any Geneva convention type laws to adhere to. Usually they have a clear cut motive, military equivalent training, access to IED, advanced suicide vest, car bomb material or AK47 kind of standard killer weapons, financial backing of those believing in the same mission and most importantly, political, ideological, academic, media & religious backing from a wide range of sources.

Examples of organized terrorist Groups:
There are literally 100s if not 1000s of banned terrorist groups in the world today. There are guidelines to governments for banning an organization for long number of years. Most importantly some groups are banned across major countries telling us that it is not just the decision of one 'evil' government, but a clear cut understanding across the globe. I am only listing four that are banned in India, as an example.
Let's now give religious colour to these groups. Note that the first and the fourth ones are usually blamed as secessionist or ultra-radical Islamic Terror groups comprising of all Muslims. The second one is blamed as a separatist terror group, comprising of Christians & Hindus. The third one is generally blamed as a communist or naxalite terror group, comprising mostly of Atheists (communists), Hindus and Christians. When Lashkar is blamed as an Islamic terror group, why is LTTE not blamed as a Christian/Hindu terror group? I will explain in a section below.. keep reading :)

What is not terrorism?
The above is not an exhaustive list, but gives a fair idea of other types of human rights abuses & crime in our society. Yes, there is a lot of overlap with what a victim families of terrorism go through and many of these crimes against humanity, but one wouldn't call a rapist or a murderer as a terrorist, unless it is perpetuated by someone who did fit into the terror bracket mentioned in a section above too.

Why separate out Islamic Terrorism?
Good question. To use a cliche again, 'Terror has no religion, no race, no colour, no gender' etc. etc. Then why is "Islamic terrorism" such an often beaten up track?

The answer lies in the concept of Jihad used systematically before, during and after the terror act.

Isn't it overwhelmingly obvious by now how this brand of terror, termed as 'Islamic' terrorism works? Isn't it obvious by now why the term 'Islam' associated with the crime committed by a few extreme minded, radical individuals? Of course it would be foolish to say all Muslims are terrorists, but those committing terrorism in the name of Allah do fit into the well established bracket of Islamic or Jihadi terrorism. It's not because they come from a Muslim family or have an Arabic name, but because THEY claim they are doing it for Islam. A huge difference compared to other categories of terrorists.

So now.. does Hindu or Saffron Terror Exist?
Simple answer - NO. Here is why.. a picture is always worth thousand words :) 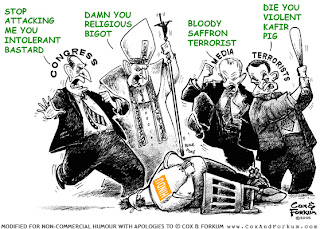 Let's not downplay any form of terror. Yes, any terror blamed as 'Hindu' Terror is also taking lives. It must be stopped & those indulged in it, irrespective of political ideology or backing, MUST be arrested & tried in a court of law. However, one needs to observe the key differences to Islamic variety.
These are just some visible differences. Just because someone with a Hindu name, from a Hindu family or a pro-Hindu organization, commit a terrorist act, that does NOT become Hindu terrorism. Hopefully this long blog post with plenty of categorizations & examples drive the point home by now. If a Hindu terror exists, then by all means, a Christian terror or Atheist terror (and Buddhist, Sikh & what not terror) must exist to give company to Islamic terror. Isn't it? The most apt description I have heard is that this is Anti-Islamic-Terror Terrorism in the Indian context. Look into Malegaon or Samjhouta or Ajmer, this fits into the equation pretty well.

Comments Welcome:
Post your views freely. I don't intend to moderate, edit or delete any comment unless it is getting too personal or too offensive for people reading from work places or homes with children. You can post for, against or somewhere in-between views. I don't claim to be an expert in this area, but presented my thoughts as is.  There was a need to bring out these thoughts as the nonsensical 'Hindu' terror fear is being propagated by politicians and media for vested reasons.

Looking forward towards learning from people with more deeper knowledge. Start :)
Posted by Kiran KS at 5:18 AM